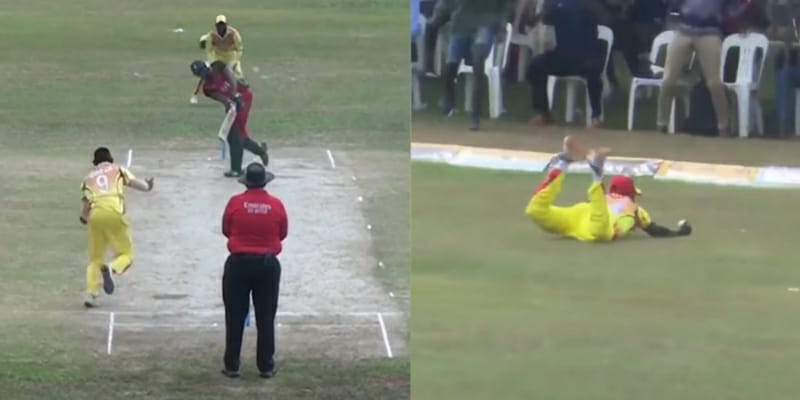 At the World Cup Challenge League match between Kenya and Uganda in Kampala, the capital of Uganda, it was just another ordinary day. Veteran 41-year-old Ugandan bowler Frank Nsubuga displayed outstanding fielding during the game.

Kenya was put in to bat in the first innings and was having a good time, scoring 127-4 after 17.4 overs. For the Kenyans, Collins Obuya and Irfan Karim were in the crease. Nsubuga, however, worked his magic in the field at this precise moment. Dinesh Maganlal, a medium pacer, was bowling to Obuya at this time and intended to hit the stands with a short ball and it also was a  slower delivery. Obuya mistimed  the shot, which landed at deep mid-wicket.

The ball appeared to be heading for no-land. But Frank Nsubuga, however, sprinted toward the ball from mid-wicket. Nsubuga sprinted at full speed and dived towards the ball on the pitch. With one hand, he grabbed it as he leaped forward.  This epic catch reminded the great Kapil Dev catch at the 1983 World Cup to dismiss Viv Richards. If that catch had gone down, West Indies would have cruised to their win.

One of the finest catches you will ever see 🤯

Rakep Patel led the team in scoring with 72 as Kenya concluded their innings at 220/10. Nsubuga was outstanding with the bat as well, picking up one wicket for 21 runs in eight overs. Uganda’s performance with the bat in response was outstanding, scoring 224 runs from 45 overs.

Watching this catch we all get goosebumps because of the 41 year old player putting that kind of effort on the field. Even if he had missed the catch, he would have been appreciated for his top notch attempt. Looks like even the commentators loved that catch so much. This catch was also shared by ICC in their official twitter handle.