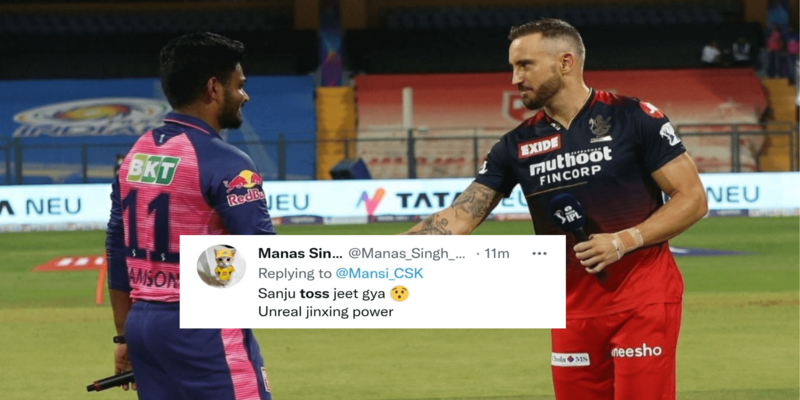 The Eliminator match between Royal Challengers Bangalore and Rajasthan Royals is taking place at Narendra Modi Stadium in Ahemdabad. Both teams will battle for a ticket to the final of the TATA IPL 2022. However, in a must win clash, the toss becomes more vital.

The toss has happened already and, surprisingly, it is Sanju Samson that has won the toss and decided to bowl first. However, RCB skipper Faf Du Plessis was happy with the result as he was also looking to bat first on the new pitch. The conditions are looking good for batting, and putting a score on the board will put pressure on RR.

But as this is an important clash, every moment is important. But it all started with the toss. Notably, this is only the third time in 16 games that Samson has won the toss. So, winning the toss also becomes the talking point among the fans, and they have also reacted to this.

On the other hand, both teams have kept the same playing XI from the last match, and there is no change in the team. So it will be interesting to see whether the toss will have an effect on the game or not. So let’s check the reactions of some fans.

RR wins their 3rd Toss of the season out of 16 matches but could be the most important one. #IPL2022 #IPLplayoffs

“I think we have seen the last of Kieron Pollard” – Aakash Chopra thinks IPL saw the last of Mumbai all-rounder
“The No.1 white-ball player in the world” – Twitter lauds Jos Buttler after his fantastic century against RCB in the Qualifier 2
To Top