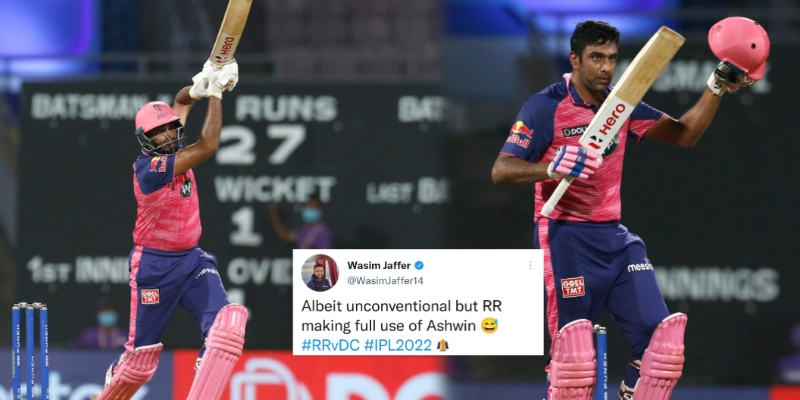 Ravichandran Ashwin is known around the world for his ability to bowl brilliant spin bowling. But, the Indian Premier League (IPL) 2022 season has been different, and to further add to that, he even scored his first ever IPL fifty.

Match number 58 of the Indian Premier League (IPL) 2022 is being played between the Delhi Capitals and the Rajasthan Royals in Mumbai’s DY Patil Stadium.

It is the Delhi Capitals captain Rishabh Pant who won the toss and opted to bowl first. Rajasthan did had a little scary moment when their most in-form batsman Jos Buttler was dismissed when only 11 runs on the board.

But after that, Yashasvi Jaiswal and unlikely of them all, Ravichandran Ashwin built a strong partnership before the former was dismissed when for the team score of 54 runs.

But, the Rajasthan’s off-spin bowler Ashwin continued to impress with his bowling, and even went on to score his maiden fifty in his long IPL career.

Ashwin is a renowned spin bowler in the world of cricket, but has proved his credibilities as a batsman as well in the longer formats. But, his brilliance today in the T20Is really surprised everyone.

Albeit unconventional but RR making full use of Ashwin 😅 #RRvDC #IPL2022 pic.twitter.com/6RZiAxbeIA

stance like he is taking a hockey penalty and playing cricket like a boss !
First IPL 50 for Ravi Ashwin. Well played ash aana 🔥 pic.twitter.com/vrBIJEDI8r

Ravi Ashwin would be the perfect replacement for Virat Kohli at number 3 in T20s 🔥. The advantage is he also bowls 4 overs 🤩🤩🤩🤩