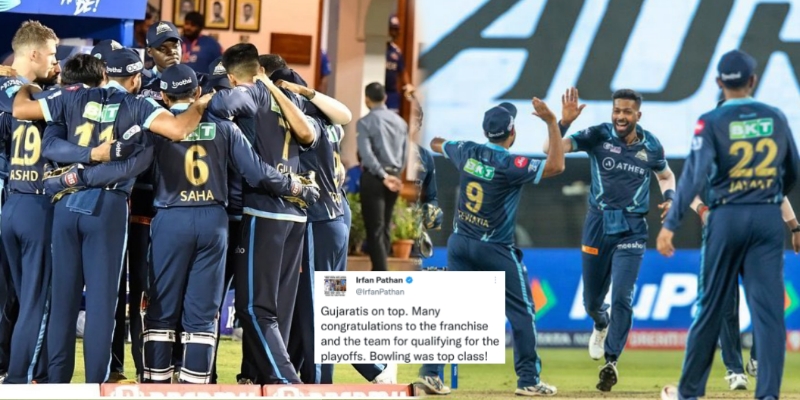 In their first season of the Indian Premier League, Gujarat Titans have performed brilliantly, winning tough and big matches in this most thrilling and surprising season, registering a huge victory by 62 runs against Lucknow Super Giants today, that confirmed their entry into the IPL 2022 Playoffs, becoming the first team to do so this season.

If we talk about the match, the bowlers of both the teams dominated the match. Where none of the batsmen were able to stay on the pitch for long, Shubman Gill played an important innings of 63 runs for Gujarat Titans. No other batsman from Gujarat and Lucknow could even score 30 runs. He was adjudged the player of the match for this innings as well.

Talking about the bowlers, the bowlers of Gujarat Titans, performing brilliantly in today’s match, bowled out the dangerous looking batting line-up of Lucknow for 82 runs. Rashid Khan took 4 wickets and Sai Kishore, playing his first match, took 2 wickets as well. Along with this, Yash Dayal also took 2 and Mohammed Shami took one wicket.

With this victory for Gujarat Titans, the social media was flooded with tweets from the fans and cricket experts of Gujarat as Gujarat made it easy to reach the playoffs in their very first season in the competition.

Gujaratis on top. Many congratulations to the franchise and the team for qualifying for the playoffs. Bowling was top class! @gujarat_titans

Gujarat Titans. Take a bow 🙇‍♂️ I must admit that I didn’t see them qualifying…couldn’t be happier to be proved wrong. Upwards and onwards. Won’t be surprised if both newcomers meet again on the 29th. But then…what do I know 🥳🤩😊

Gujarat Titans have qualified to the IPL playoffs and the credit for this should also be given to Nehra Ji with a single piece of paper 😎#GTvsLSG #IPL2022 pic.twitter.com/1m5CGAxUU8

“Worst team on paper, would be first team to get knocked out”
Same hardik who wasn’t even gully level captain according to some has made this team first team to qualify for playoffs.

“What a day for the IPL”, Twitter reacts as Sai Kishore finally makes his IPL debut
“RR making full use of Ashwin” – Twitter reacts to Ravichandran Ashwin scoring his first IPL fifty
To Top