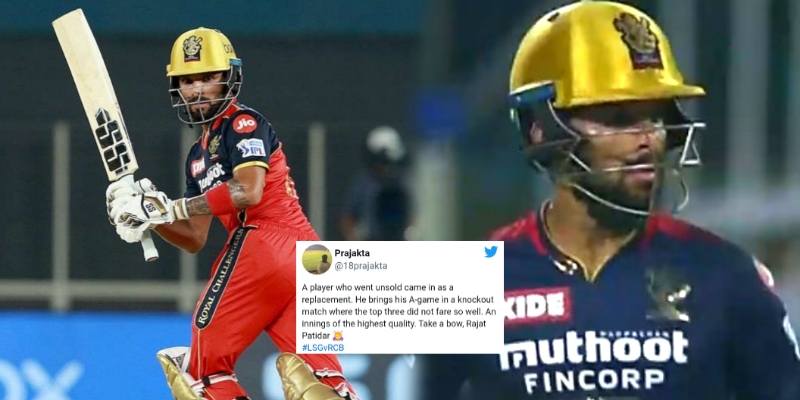 28-years-old Madhya Pradesh batsman Rajat Patidar showcased his brilliant batting display for a star-studded side as he scored a century in the ongoing Eliminator match of IPL 2022.

To determine who will face the Rajasthan Royals in the Qualifier 2 of the Indian Premier League (IPL) 2022, Lucknow Super Giants and Royal Challengers Bangalore are facing off in the eliminator match, with the winning team going through to face the Royals.

It was Lucknow skipper KL Rahul who won the toss and opted to bowl first. Bangalore skipper Faf du Plessis was dismissed early on for a Golden Duck. While Virat Kohli and Rajat Patidar tried to take the inning forward, the former was dismissed for 25 runs.

Thereafter, it was just a one man show from the 28-years-old right-hand batsman, who not only remained on the pitch, but, go on to score his first century of the IPL 2022, helping Bangalore to finish off well.

Fans on Twitter admired the right-hand Madhya Pradesh batsman, for coming up with such a inning for a team that is completely star-studded.

Maiden IPL century by Rajat Patidar. One of the craziest knock in IPL Playoffs. Wasn’t even part of RCB after the auction and in the most important game, he’s playing a match winning knock. pic.twitter.com/gwsG9AeDON

Who needs Faf, Virat & Maxwell when you have Rajat Patidar in your side. He is playing out of his skin right now 🤯😱💥💥#IPL2022

A player who went unsold came in as a replacement. He brings his A-game in a knockout match where the top three did not fare so well. An innings of the highest quality. Take a bow, Rajat Patidar 🙇‍♀️#LSGvRCB

In a team of batting superstars and cricketing royalty, Rajat Patidar is dragging RCB forward in this IPL. What a season the man is having and he didn’t even play half the games for them