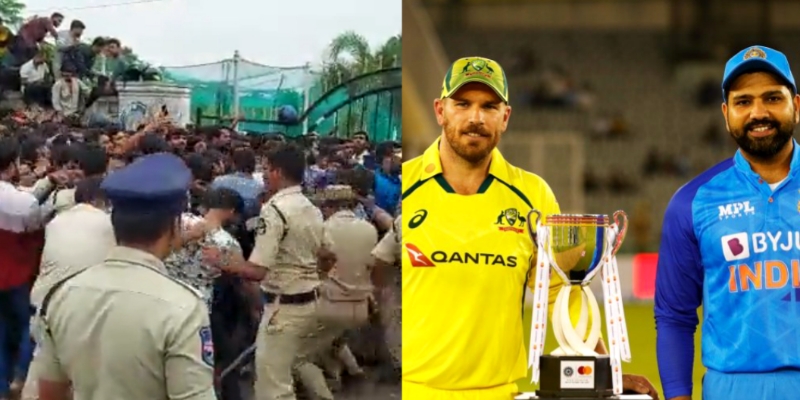 The third and final T20 match between India and Australia will be played in Hyderabad on 25 September. With this, the sale of tickets for this match has started and there is a huge demand for it.

The Hyderabad Cricket Association (HCA) had decided to sell tickets offline at the Gymkhana ground for the match, but they probably did not expect thousands of people to come here to collect tickets. It was being claimed through social media that people have come to get tickets since 5 am early in the morning and the line is increasing continuously.

All the people were hoping that the ticket counters will open as soon as possible and they could take the tickets and go back to their homes, but the queue continued to grow. It became incredibly difficult for the authorities to handle such a crowd which led to a stampede.

People were queuing hungry and thirsty since morning. The queue was increasing continuously, due to which many people got angry. On seeing the commotion errupted there, the police had to lathi-charge the cricket fans. A source told Times Now that the stampede left four people with serious injuries and were immediately taken to a local hospital.

It has also been claimed that some policemen and some people were hurt due to the stampede, due to which they fainted on the spot.

Australia won the first match of the three-match T20I series by 4 wickets in Mohali. Coming to bat first, the Indian team scored 208 runs for the loss of 6 wickets in 20 overs, which Australian team chased down while 4 balls remaining.

The second match will be played on 23rd of September at Vidarbha Cricket Stadium in Nagpur. If the Indian team wants to stay alive in the 3 match series, then it is very important for the Indian team to win the 2dn match, while Australian team would like to win the series by winning the match.

This is so disappointing. Passionated fans gathered at Gymkhana Ground to collect India Vs Australia tickets in Hyderabad and they're getting such treatment. pic.twitter.com/OIP96BClOH

And Hyderabad police ended up lathi-charging the fans, who lined up for tickets since last night. Why can't there be better arrangements when thousands of fans are expected? Fans can't be treated like this. https://t.co/P5zdrJtacP

Never had a problem earlier to gets tickets for a Cricket match in hyderabad but this time it has become impossible, thanks to incompetent @azharflicks who couldn't decide to sell offline or online.

HCA is most corrupted Cricket body in whole India …they give majority of tickets to celebs ..n remaining tickets are sold at double rates and only 20% of the tickets are sold Legally …if this continues ,even BCCI will avoid to Held a Match in Hyderabad …

Hyderabad cricket fans waiting for tickets at 5 am today. pic.twitter.com/U4xvFGsVy6