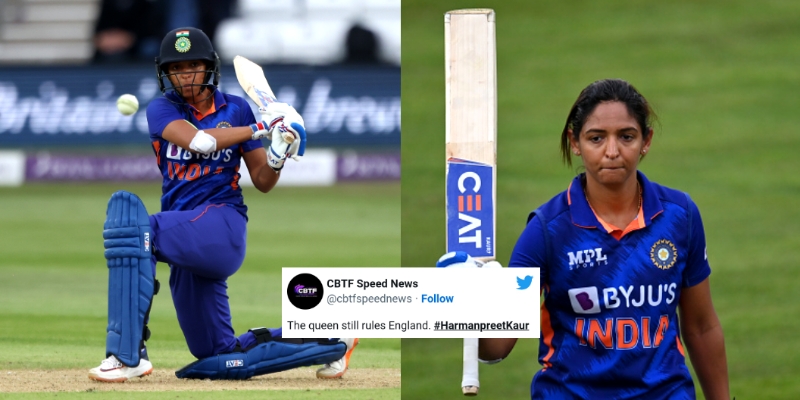 The Indian women’s team defeated England by 88 runs in the second ODI and took an unassailable 2-0 lead in the series. India scored a mammoth total of 333 runs for the loss of 5 wickets in the allotted 50 overs, thanks to a scintillating century by captain Harmanpreet Kaur. In reply, England team got out after scoring 245 runs in 44.2 overs. Harmanpreet Kaur was adjudged the player of the match for her century.

England captain Amy Jones won the toss and elected to bowl. Batting first, India got the first blow in the form of Shefali Verma on the score of 12 runs. After this, Smriti Mandhana and Yastika Bhatia took over the innings and took the score to 66 runs. Mandhana was dismissed after scoring 40 runs and Yastika scored 26 runs.

Harleen Deol and captain Harmanpreet Kaur shared a great partnership of 113 runs for the fourth wicket after the fall of 3 wickets for 99 runs. Harleen Deol scored 58 runs. After that, Captain Harmanpreet along with Pooja Vastrakar took the innings forward and in the meantime completed her century. After scoring a century, the Indian captain batted very vigorously in the last overs. She completed her century in 100 balls but scored the next 43 runs in just 11 balls.

Harmanpreet Kaur played an unbeaten innings of 143 runs off 111 balls with the help of 18 fours and 4 sixes. The result of her explosive batting was that the Indian team scored 121 runs in the last 10 overs and India put up a huge total.

The way Harmanpreet Kaur played was excellent, what a top knock of 143*. pic.twitter.com/w9m2ZQtIFs

A knock that had everything at display: perfect placement, sweeps, aerial cover drive. Take a bow, Harmanpreet Kaur! She just demonstrated how to play the game thoroughly and flare up in the end.#ENGvsIND