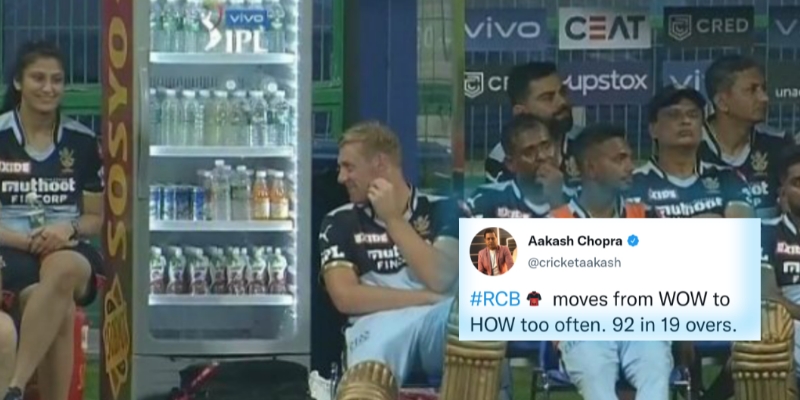 Prior to the game, RCB was No.3 on the points table while KKR was struggling at No.7. However, it was the Kolkata-based unit that dominated the proceedings. They won the game by a massive margin of nine wickets with 60 deliveries to spare. In this article, we take a look at Twitter reactions to KKR’s Massive victory over RCB.

The game started with RCB winning the toss and electing to bat first. The Bengaluru-based unit was rocked back early with the wicket of captain Virat Kohli. Although Devdutt Padikkal and KS Bharat steadied the proceedings for a bit, DDP lost his wicket in the final ball of the powerplay and this triggered a collapse for RCB.

Both AB de Villiers and Glenn Maxwell were unable to pull RCB out of the hole like the way they did in the first phase of IPL 2021. After the duo got out, the writing on the wall was an underwhelming first inning score for RCB. They got bundled out for just 92 runs. KKR made a merry of the chase as the new opening duo of Shubman Gill and Venkatesh Iyer made things look easy. They helped KKR reach the target with 10 overs to spare. It became one of the heaviest wins in IPL with regards to the number of balls left.

Twitter was yet again disappointed with the way Virat Kohli’s boys turned up after the break. Virat himself did not look in great touch as got out LBW. The other batsmen, too, did not step up. Bowling also was not off the mark. They needed more runs to defend, though. KKR made a statement after a miserable start to IPL 2021. The Eoin Morgan-led squad will now target a playoff spot. On that note, here is a look at Twitter’s reaction to the game:

All part of the experience of being an #RCB fan….

KKR congrats! It’s your night. How good was Chakravarthy’s spell?! Woah! And Iyer and Gill steering the team home. RCBians it just wasn’t our day. We will regroup and we will be back stronger. ♥️ #KKRvRCB

It’s not just the victories that define you…often it’s the way you lose. How bad are your off days!!! #RCB ought to find a way of not lose so badly that NRR takes a solid beating. Great teams manage to lose as little as possible even in losses. #IPL2021 #RCBvKKR

This was an unplayable yorker by Andre Russell.#KKRvRCB #IPL2021 pic.twitter.com/Vhaepum8tf

People are now figuring why Varun Chakravarthy is in that World Cup squad.

This Venkatesh looks a class act.#RCBvKKR