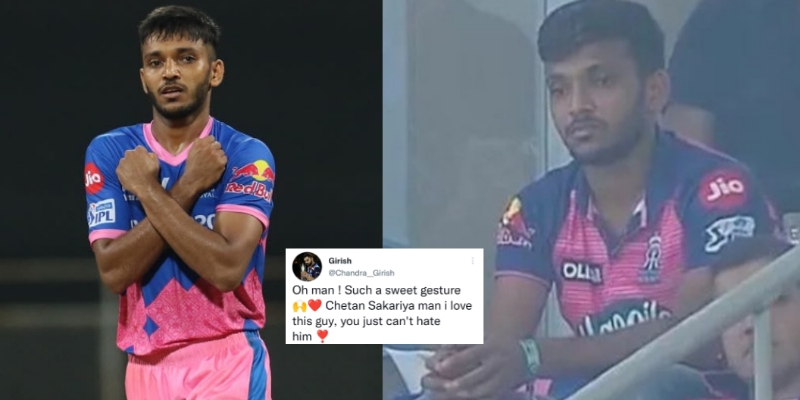 Rajasthan Royals fans and cricket fans in particular are quite to heartfelt after they saw a former Rajasthan Royals player Chetan Sakariya cheering for the in the final of the IPL 2022.

It is the Gujarat Titans and the Rajasthan Royals who are taking on each other in the grand finale of the Indian Premier League (IPL) 2022 season in Ahmedabad’s Motera Stadium.

It was Rajasthan Royals skipper Sanju Samson who won the toss and opted to bat first, to much of everyone’s dismay. However, their batting unit were not really able to deliver, even after Jaiswal and Jos Buttler gave them a cracking start.

At the end of their 20 overs, Rajasthan Royals could only 130 runs beside them and now Gujarat Titans need 131 runs win the IPL 2022 Trophy.

However, a former Rajasthan Royals player has won everyone’s heart with his gesture tonight. The 24-years-old Gujarat born bowler was seen at the stadium, cheering for his former team against what is a team representing his local state.

Chetan was a part of the Rajasthan Royals camp last year. He played 14 matches for them and took 14 wickets. However, at the IPL 2022 Mega Auction, the player was picked up by the Delhi Capitals. However, the player remained loyal to his former team, who are fighting for the title against a team representing his local team.

Fans on Twitter also praised the left-arm pacer for his loyalty. Check-out how Twitter reacted to it.

Chetan Sakariya in Pink . That's all we want 😌

Delhi Capitals’ Chetan Sakariya is present at the IPL 2022 finals.