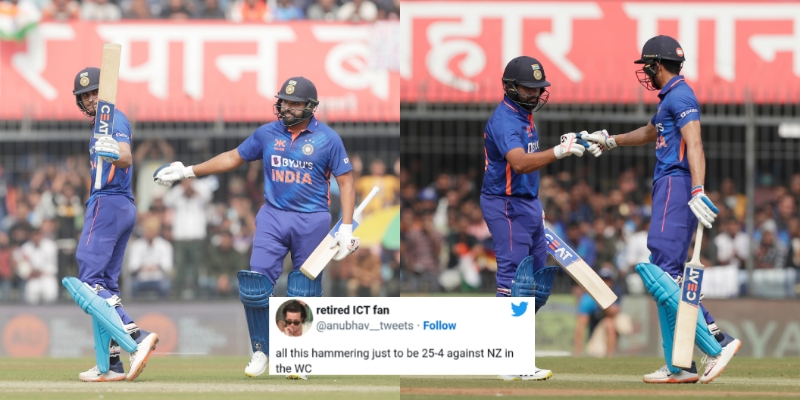 The 3rd and the final match of the One Day International (ODI) series between India and New Zealand has already begun at the Holkar Stadium in Indore and team India is playing some really good cricket.

It was the New Zealand captain Tom Latham who won the toss and opted to bowl first. However, the Indian opening duo of Shubman Gill and Rohit Sharma has given Team India a great start.

As of writing this article, the men in blue are sort of playing T20 cricket in Indore with the ground size and and the pitch is really helping the batting. India have scored 147 runs in 17 overs without losing any wicket as of writing this. Both the batsman, Rohit Sharma and Shubman Gill have scored fifty plus run.

However, despite all this, the Twitterati is making joke that New Zealand will like in the past will dominate India come the ICC Cricket World Cup 2023. New Zealand have always got the better of the Indian team in the World Cup events.

That's why I m not too excited about bilaterals

Conditions, ground and form apt for a 150+ score by Rohit. Got his fastest T20I hundred as well here. Just needs a little bit of luck today to not get out to the odd opportunity that is created.