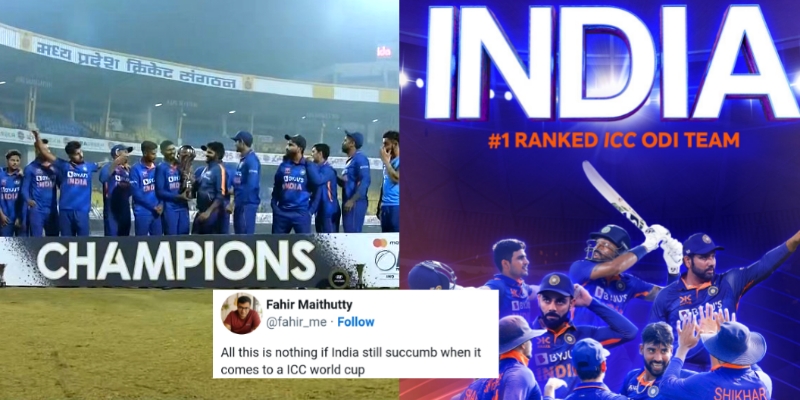 A high scoring match at the Holkar Stadium in Indore ended with the Indian team triumphant and reclaiming the number 1 ODI ranking.

Team India registered a 3-0 win in the ODI series against New Zealand with a emphatic 90 runs win in the 3rd ODI in Holkar Stadium in Indore.

After was asked to bat first, both the Indian team openers Rohit Sharma and Shubman Gill scored century each. While Sharma scored 101 runs, Gill scored 112 runs.

However, the middle-order saw a collapse but vice-captain Hardik Pandya led a good comeback which was supported by Shardul Thakur as India posted 385 runs on the board.

With this 3-0 series win for Team India, they have now reclaimed the number 1 ranking in the ICC Teams ODI Ranking. However, the fans don’t bother about ranking if India can’t win the ICC Cricket World Cup 2023 to be played in India this year.

INDIA ARE THE NEW NO.1 RANKED ODI TEAM. 🇮🇳

If they win the WC this year they wil justify the number one odi ranking!

Still ICC trophy pending since 2013, it does tell a story of Indian cricket.

Unless India wins ICC trophies, these rankings are meaningless. https://t.co/h7U3JZvlZH