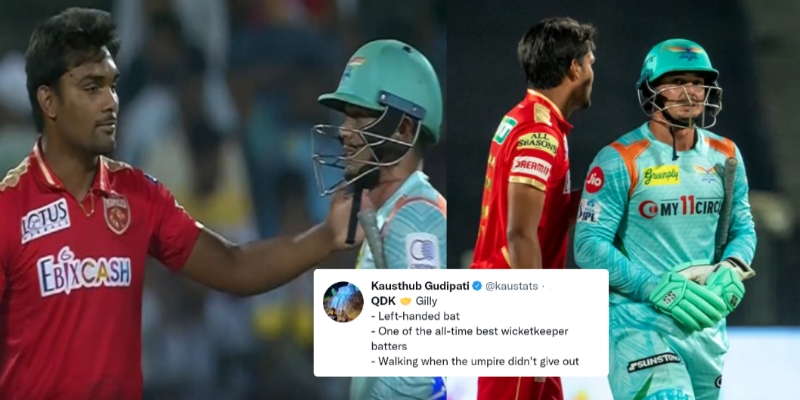 A great bit of fairplay and sportsmanship was in display tonight in the Indian Premier League (IPL) 2022 when the South African batsman Quinton de Kock walked off even though had given not out.

Match number 42 of the Indian Premier League (IPL) 2022 is being played between Punjab Kings and the Lucknow Super Giants in Pune’s Maharashtra Cricket Association Stadium.

Punjab captain Mayank Agarwal won the toss and opted to bowl first. Kagiso Rabada drew first blood soon in the game when he got rid of Lucknow skipper KL Rahul.

Thereafter, Quinton de Kock and Deepak Hooda (coming in at number 3) formed a great partnership, adding 85 runs before Quinton de Kock called himself out by himself after umpire gave it a not out.

A ball from Sandeep Sharma outside off surprised Quinton and took edge of his bat and carried to Jitesh Sharma, however, the umpire gave it a not out.

But, even after that, Quinton de Kock decided to walk towards the pavilion without caring about the umpire’s decision. Everyone on the field appreciated de Kock for his sportsmanship, while Sandeep Sharma gave him a pat on the back.

Fans on Twitter also praised Quinton de Kock for his sportsmanship and fairplay.

Really great sportsmanship from Quinton de Kock. Umpire not given out but he knows got inside edge and he walks backs to the pavillion. Even Sandeep Sharma appreciates this and pat on Quinton de Kock's shoulder. pic.twitter.com/ne2x0F2x4T

It is left to the individual to walk or not. But good to see Quinton de Kock showing sportsman spirit.

Great sportsmanship by Quinton De Kock. He knew he knicked it and went away himself. 🙏

Quinton DE kock ,no matter what ,you won hearts from opposition too❤️.

I can't explain why, but Quinton de Kock walking is one of the most surprising things I think I've ever seen