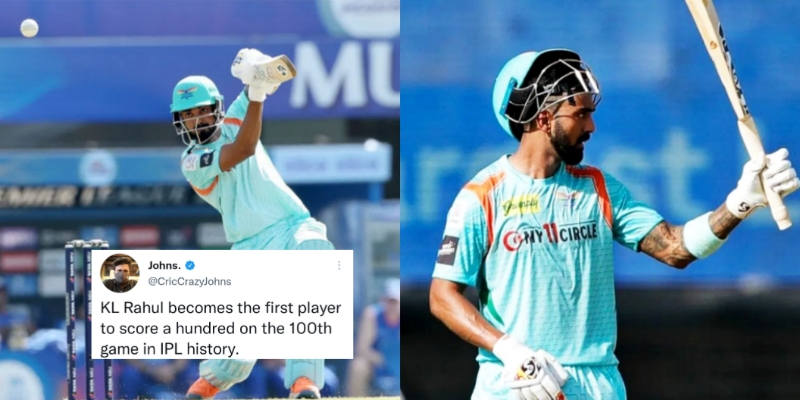 It is no secret that Mumbai Indians has been KL Rahul’s hunting ground for the many years as the right-hand batsman has dominant record against the most successful team in the history of the Indian Premier League (IPL).

And he continued his form in the most recent match as well as KL Rahul scored 103 runs not out in the match number 26 of the Indian Premier League (IPL) 2022 season, helping his team post 199 runs on the scoreboard.

It was Rohit Sharma who won the toss and decided to field first. However, his decision backfired as Lucknow Super Giants were able to build good partnerships that kept their inning rolling.

Rahul and de Kock added a strong partnership of 52 runs in the powerplay before the latter was dismissed. Even Manish Pandey had a good match, scoring 38 runs from 29 balls.

But, the highlight of the inning has been KL Rahul’s batting. The Karnataka born Lucknow skipper is back in form as Twitter heaped praise on the Super Giants’ skipper.

Hundred by KL Rahul in 56 balls. What a knock by him, it’s been a captain’s knock. Just marvelous from KL, sheer class. 2nd IPL hundred against Mumbai. pic.twitter.com/nZ01j0jPhQ

KL Rahul becomes the first player to score a hundred on the 100th game in IPL history.