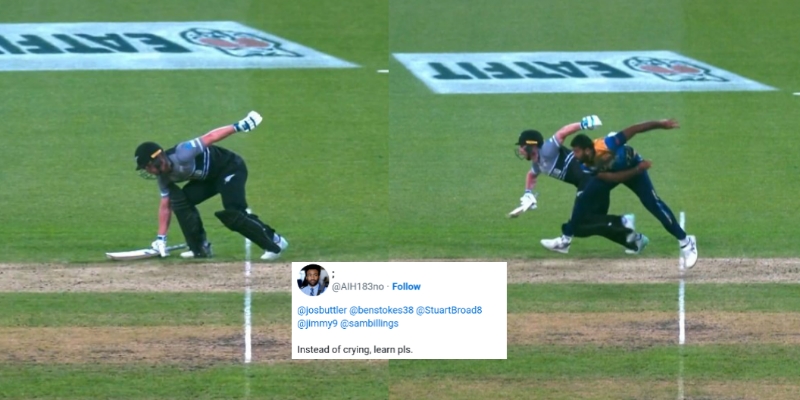 Batting first in the match, the Kiwis scored 167 runs despite a dismal start. However, middle-order batsman Glenn Phillips’ played a crucial role in taking the Blackcaps to a fighting position in the match.

Having lost 3 wickets for just 15 runs, Glenn Phillips led the charge for New Zealand and scored a brilliant century as he scored 104 runs from 64 balls.

But, other than the century, Phillips was the talk of the town due to sense of mind that he displayed during his inning to take quick runs but not fell pray to Mankading (now officially run out).

While the bowler bowled the ball, Glenn Phillips would take a stance of a runner and when the ball is bowled, he would run for a quick run. Seeing, Twitterati praised Glenn for creativity while there is much controversy regarding this Mankading run out situation.

Instead of crying, learn pls.

"Phillips – innovation and you"!

This man was on fire today! https://t.co/ELr8pF0HLO

Hey whiners @ECB_cricket that's how you play cricket smart and still be within the rules. Don't be cry babies. https://t.co/tLYSSp5Pqx

Hey @josbuttler along with the plenty of skills you have how abt learning this one too. Could save your wicket sometimes if not anything.#RealSpiritofCricket https://t.co/K0cLDm6ndS

“After approaching MS Dhoni, Pant got dropped from Playing 11” – Twitter reacts to reports that Rishabh Pant and Hardik Pandya approached MS Dhoni to get advice to improve their T20 game
“Just how fast the night changes” – Twitter reacts to a video showing Virat Kohli playing same shots as Shaheen Afridi imitated after dismissing him in T20WC 2021
To Top