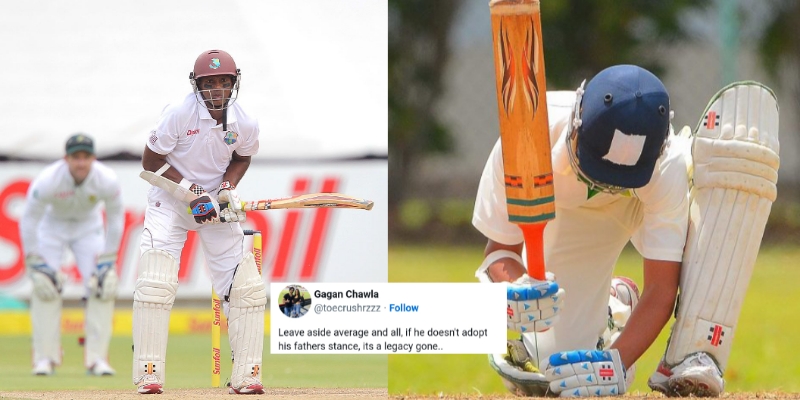 West Indies cricket team is today going through one of their worst phases. However, it was not the same previously. West Indies were one of the most dominant force in the game and many legends have played for them. And one of them is Shivnarine Chanderpaul.

Shivnarine Chanderpaul was one of West Indies team’s important member in any format of the game, especially in the Rest and ODI format. Chanderpaul was a middle-order constructor for West Indies and he announced his retirement at the age of 41 in 2016.

Following this announcement, fans couldn’t keep their emotion. Everyone knows Shivnarine had a pretty interesting batting stance that was a huge part of his and now the fans are curious if his son has the same batting stance.

Leave aside average and all, if he doesn’t adopt his fathers stance, its a legacy gone..

Does his stance also will looks like his father?

If he’s 10% of his father, he’ll be a huge prospect for wi in tests

Wow what a massive legacy to match https://t.co/pSwgTzS5pH

Please say he has his Dad’s batting stance. Loved it

“Just how fast the night changes” – Twitter reacts to a video showing Virat Kohli playing same shots as Shaheen Afridi imitated after dismissing him in T20WC 2021
“Time to open with Chahal and Shami, Kohli and Rohit should bowl in powerplay” – Twitterati mocks Pakistan fans as they are dependent on India winning against South Africa to make it to semi-finals
To Top