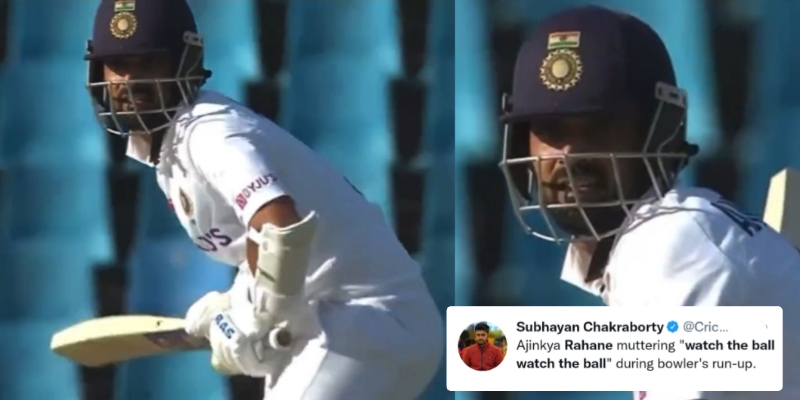 Team India has begun the South Africa Tour on a good note. While KL Rahul and Mayank Agarwal put on a century stand, the likes of Virat Kohli and Ajinkya Rahane did well. Especially the latter, whose place in the XI was in the scanner. In this article, we take a look at how Twitter reacted as Ajinkya Rahane frequently utters ‘Watch the Ball’ on Day 1 in South Africa.

Rahane’s form has not been great in recent months. He has failed to score runs and was recently stripped of his vice-captaincy, as well. Hence, when he was selected in the XI ahead of Shreyas Iyer and Hanuma Vihari, many felt it was the wrong call.

However, Rahane has looked good so far in the game. He has already scored 40 runs and looks set for a big knock. For a player of his stature, being in this situation must have been demoralizing. Hence, to keep his concentration, he was frequently seen uttering “Watch the Ball” during the bowler’s run-up.

Twitter seemed to be impressed with Rahane’s effort to score a big knock. Apart from his own personal goals, Rahane doing well will also serve the team very well. Below, we take a look at a few Tweets after Rahane muttered ‘Watch the Ball’ on multiple occasions:

Ajinkya Rahane constantly saying to himself .."watch the ball"

Rahane reminding himself to watch the ball as the bowler runs up makes me realise how cruel cricket can be for such experienced guy pic.twitter.com/3HKhVgMMFc

Struggle is beautiful to watch, in a very sad way.

Rahane trying to straighten his chin position and saying "watch the ball" to himself in full public eye with a string of low scores behind him is… difficult.

Rahane speaking the 'watch the ball' mantra too. #SAvIND

You can see Rahane saying: “Watch the ball” just before the bowler bowls the ball. Good way to get correctly focused and enter the zone 🎯#INDvsSA

Ajinkya Rahane has Resolute printed above his bat sponsor on his cricket bat, has mouthed “Watch the ball” countless times before facing his deliveries and attacked and defended with intent. Refreshing Resolute Rahane. #SAvsIND @ajinkyarahane88

Ajinkya Rahane has Resolute printed above his bat sponsor on his cricket bat, has mouthed “Watch the ball” countless times before facing his deliveries and attacked and defended with intent. Refreshing Resolute Rahane. #SAvsIND @ajinkyarahane88

Should he have been dropped much earlier? Absolutely yes.

But can't imagine what he must be going through to be batting right now.

Rahane has been saying something, most probably “Watch the ball”literally every single delivery. #Rahane #INDvsSA