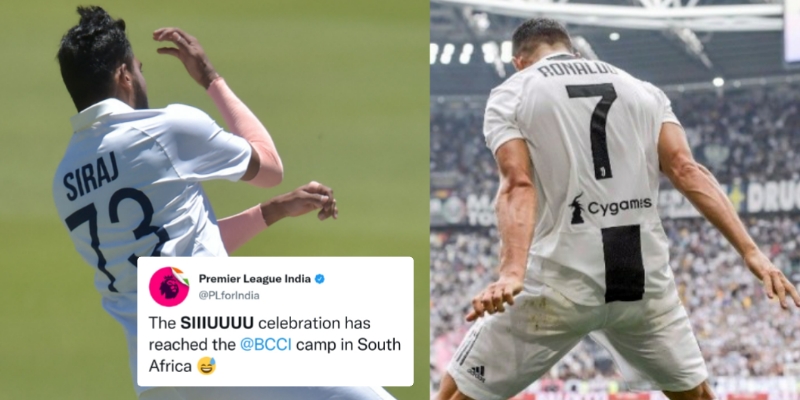 Team India has taken a 130-run lead in the first Test at South Africa. Within a few sessions, India managed to bowl out South Africa. Although not at his exact best, Siraj did return with a wicket in the first innings. He also performed footballer Cristiano Ronaldo‘s iconic celebration to mark the occasion. In this article, we take a look at how Twitter reacted after Siraj Performs Ronaldo’s SIIIUUUU celebration in South Africa.

After taking Rassie van der Dussen’s wicket, Siraj did Ronaldo’s celebration. While fans expected him to pull off the “finger on the lips” gesture, Siraj surprised many with his choice of doing the iconic celebration.

Meanwhile, Team India has taken the driver’s seat in the first game at Centurion in South Africa. Although the batters could not add much to the overnight score, the bowling department, led by Mohammed Shami helped India take a strong lead. With two more days in the go in the game, the match seems to be in India’s bag.

Mohammed Siraj already enjoys a cult following due to his bowling and also the way he celebrates his wickets. Hence, with him doing a different celebration this time, Twitter had many opinions. We have curated a few in the below sections:

The 𝗦𝗜𝗜𝗜𝗨𝗨𝗨𝗨 celebration has reached the @BCCI camp in South Africa 😅 pic.twitter.com/VLELTNhPbM

Siraj picks up his first wicket and does the Siuuu celebration!🍾 Ronaldo fan in the house!#INDvsSA #mohammedsiraj #Ronaldo pic.twitter.com/7FjGD3gOzF

SOMEONE CLIP THE SIRAJ CELEBRATION

Siraj just did the SIUUUUU celebration in South Africa..

Pessi can have as many robbed ballon d'ors as he wants but he can never have the streets like Ronaldo has in every part of World.

Siraj doing a Cristiano's "Siuuuuuu" celebration is so cringe tbh. He should stick to "fingers on the lips" celebration only😠🔪

Siraj did the Cristiano Ronaldo celebration 🔥🔥🔥.
India are all over the South African top order. #INDvSA pic.twitter.com/ixbYmHPbVt