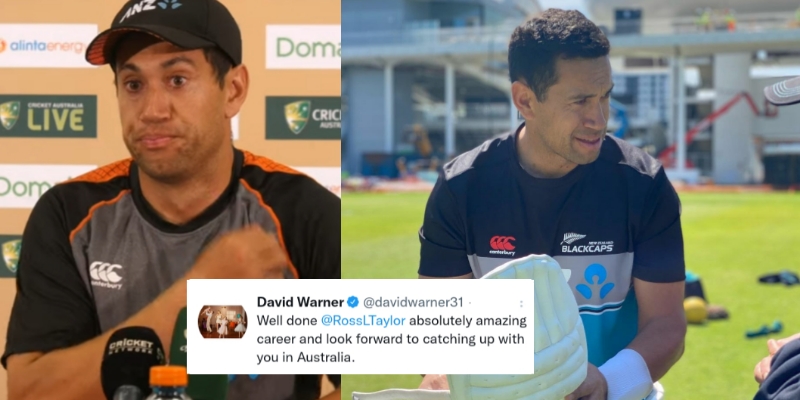 Taylor has been a fine servant for New Zealand cricket. He is the only player who was completely part of the transition from the previous era to the current. The right-hand batter played more than 100 games in all formats of the sport. He happens to be the only player to have done that. Ross retires as the highest run-getter for the Kiwis in Tests and ODI format.

Taylor had a mediocre tour of India. His form has not been great in recent months. Hence, he has quit international cricket at the conclusion of the home summer.

Taylor was a favourite of many cricket fans. A quality middle-order batter, he did well across conditions. He was also popular for some of his cult knocks, like in the IPL and the World Cup. Hence, Twitter was brim with reactions after the player announced retirement.

Today I’m announcing my retirement from international cricket at the conclusion of the home summer, two more tests against Bangladesh, and six odi’s against Australia & the Netherlands. Thank you for 17 years of incredible support. It’s been an honour to represent my country #234 pic.twitter.com/OTy1rsxkYp

Ross Taylor, the only cricketer to have played more than 100 matches in all three formats, will retire after the home New Zealand season. Great player !

Ross Taylor to retire from International cricket by the end of home summer.

Another classical middle order player will be missed forever.

His pallekele 💯 vs Pakistan will be remembered forever.

Ross Taylor to retire at the end of the NZ season. He’s been a terrific player and overcome some serious challenges to become a Kiwi legend. https://t.co/SGYxesjfiF

A salute to Ross Taylor. It’s the right time for him to retire? but he belongs among our very top level of batsmen. Just read the stats, and in all forms of the game.
He showed huge character in recovering from the shafting he got from NZ Cricket midway through his career.

Such a shame! One of New Zealand’s greatest batsmen! How do they replace Ross Taylor?