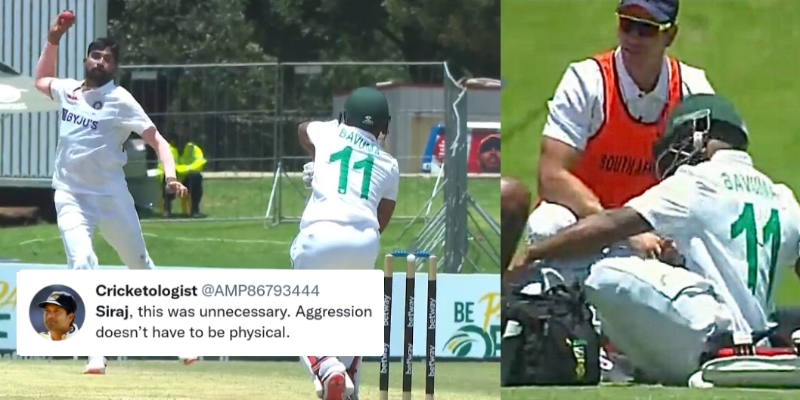 Mohammed Siraj’s pace bowling has impressed every member of the cricket universe so far. He continued his fine form in the match against the South African cricket team as well. Many fans would have an idea that the fast bowlers generally bowl with aggression, and the same aggression could be seen when Siraj bowled to the South African batters in the match.

During the second innings of the South African cricket team at the SuperSport Park in Centurion, Mohammed Siraj bowled a fiery delivery to Temba Bavuma which was blocked by the batter. The ball went towards Siraj who collected it and threw it over-arm towards Bavuma.

The throw hit the South African cricket team batter Temba Bavuma very hard. It is so hard that the batter Bavuma needed some help from the team’s physio. Mohammed Siraj apologized to him instantly. It was not clear if he tried for a run out because Bavuma had seemingly not left the crease.

Twitter was abuzz with reactions to the incident that happened at the 61.1 overs mark in the South African cricket team’s second innings. Here are some of the top reactions:

Siraj hits Bavuma on the foot in an attempt to run him out.

Team India trolling Siraj for it😂

Bumrah at the end: they can here us (in the stump mic) pic.twitter.com/APqZYz3gCT

Bavuma hopped before going down in pain as Siraj hurled a throw back at him and unintentionally hit the batter #INDvSA https://t.co/UIAw3PRaSm

#Siraj immediately apologised and checked on him. But #Bavuma was hopping around and the physio had to be called. #SAvIND #INDvSAhttps://t.co/OWECwFxJzH

I rather like Mohammed Siraj’s alpha-competitiveness & the crazed look in his eyes when bowling, but chucking the ball AT Bavuma post-bowl when he wasn’t even CONTEMPLATING a run and, potentially, injuring the South African batter’s heel is just NOT cricket..!!#SAvIND pic.twitter.com/zA4UuMGLTm

That’s seriously poor from Siraj. Bavuma hasn’t ever left the crease and he launches the ball his way for no reason whatsoever. #SAvsIND