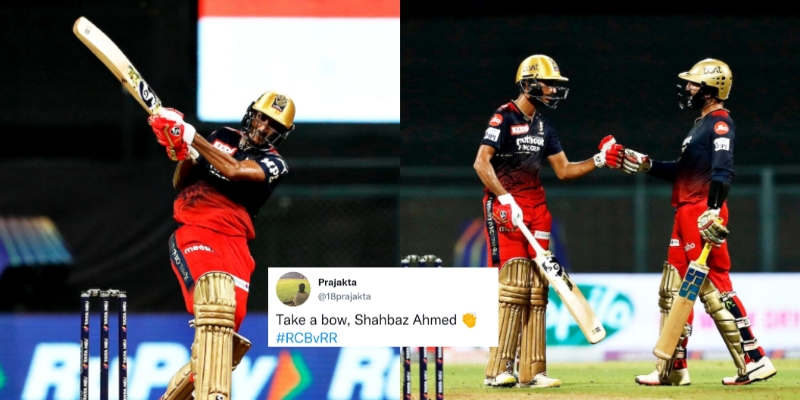 While wicketkeeper batsman Dinesh Karthik was hero to win the match for Royal Challengers Bangalore (RCB) against Rajasthan Royals (RR), young Shahbaz Ahmed caught the eyes of many with his stunning batting performance.

While Dinesh Karthik finished the match for the Bangalore based franchise, young Shahbaz Ahmed also bagged praise for his performance. Coming in at number 6, Shahbaz Ahmed showed the maturity to lead the chase.

The Bengal all-rounder scored scored 45, runs of 26 balls before being dismissed by the left-arm pacer Trent Boult while looking to accelerate the inning.

Royal Challengers Bangalore (RCB) has been backing since the year 2020, when they bought him the auction. While he was performing consistently for Bengal, he was yet to setup for RCB, which he has done this year, playing knocks of 27 and 45 runs in his first two innings in the IPL 2022.

While Dinesh Karthik got RCB over the line, Shahbaz Ahmed also earned praise from the Twitterati.

This was a special innings from the uncapped Shahbaz Ahmed. And Dinesh Karthik continues to live up to his finishers role for RCB.

Shahbaz Ahmed's clean striking left me stunned. All the strikes that cleared the rope were so clean. This guy has some serious talent.

A moment of appreciation for Shahbaz Ahmed ♥️ pic.twitter.com/XNIdjO1zaE

People like Shahrukh Khan, Abdul Samad, Riyan Parag getting the hype but this Shahbaz Ahmed is winning matches for Bangalore.