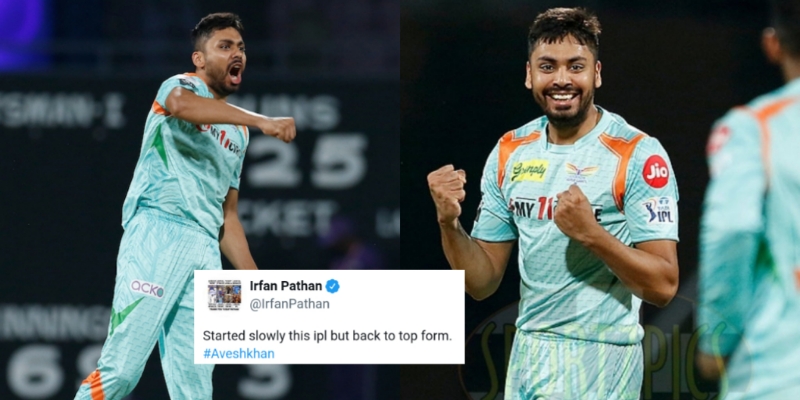 After putting in 169 runs on the board while batting first, Avesh Khan’s 4 wicket-haul helped the Lucknow team to stop Sunrisers Hyderabad at 157 runs.

After winning the toss, Kane Williamson opted to bowl first and got off to a great start, dismissing Lucknow’s first 3 wickets inside 5 overs for just 27 runs.

However, captain KL Rahul and Deepak Hooda played very crucial inning for Lucknow. While the former added 68 runs, the latter scored 51 runs and then a little cameo from Ayush Badoni helped them post 169 runs on the board.

In chase of the target of 170 runs, Sunrisers Hyderabad were in good shape till the 17th over, having put 137 runs on the board for the loss of 4 wickets only. Then came Avesh Khan, who turned the game around, taking 2 wickets in 2 balls in the 18th over. And then again lost 3 wickets in the final over as Lucknow won by 12 runs.

With that, Avesh Khan has now become the 2nd highest wicket-taker in the IPL 2022. Here’s how Twitter reacted to Avesh’s brilliant bowling performance.

Massive credit to KL Rahul the captain, he went for the attack and bowled his best bowler of the day Avesh Khan in the 18th over with experience bowlers like Tye and Holder had overs left.

Total team work bowling unit by Lucknow, Avesh Khan led from the front and supported by the rest. Back to back in this season, they are coming good as a team together in the last 2 games.

Avesh Khan's spell shows why he is one of India's most valuable pace bowling assets right now. It was evident even last season, yet Delhi Capitals let him slip away from their hands. #SRHvLSG

Started slowly this ipl but back to top form. #Aveshkhan

Avesh Khan’s 18th over turned the game in Lucknow’s favour.

What a spell bowled by Avesh Khan. His Bowling figure (4-0-24-4) against SRH in this match. He is now second highest Wickettaker in this IPL. Outstanding Avesh Khan. pic.twitter.com/aKirJv9O6X