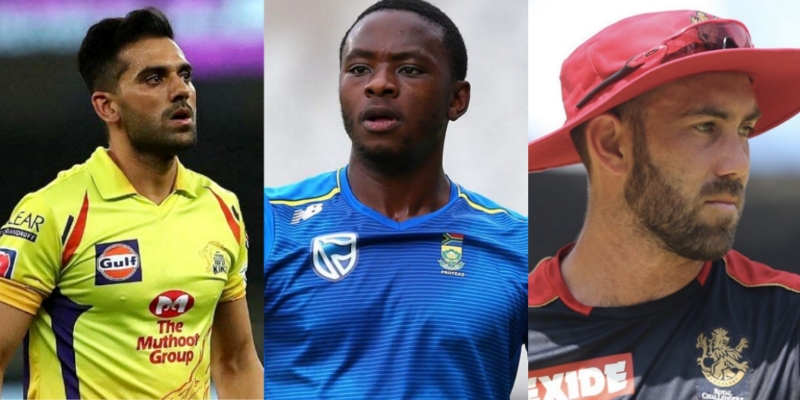 The Indian Premier League (IPL) is the grandest stage of them all and the 15th season of the World’s most richest and biggest T20 cricket league is set to begin from tomorrow, the 26th of March with Chennai Super Kings (CSK) taking on Kolkata Knight Riders (KKR).

The 2022 Indian Premier League (IPL) is set to be a crazy season with number of changes prior to the kick-off. MS Dhoni and Virat Kohli won’t be seen leading CSK and Royal Challengers Bangalore (RCB) respectively, while 2 new teams, Gujarat Titans and Lucknow Super Giants have joined the league to expand it to a 10 teams league.

The IPL 2022 starts from the 26th March, but not all the teams will have their full-strength team available from the match number 1. Today, in this article, we take a look at the team-wise list of players injured or unavailable for IPL 2022.

Let’s start with the Chennai Super Kings, the defending champions. CSK won’t have the services of premium pacer Deepak Chahar due to injury, while Moeen Ali’s arrival was dayed due to visa issues and now will have to go through a quarantine period and thus won’t be available for match 1 atleast. South African all-rounder Dwaine Pretorius is the other overseas players who won’t be available for the match 1 atleast after he played for South Africa in the ODI series against Bangladesh on the 23rd March.

Kolkata Knight Riders will be missing the Australian duo of Aaron Finch and Pat Cummins for the starting couple of matches as Finch will be playing the limited overs series against Pakistan, while Australia’s rules states that no contracted players can play anywhere during an ongoing series, even if the player is not part of the squad.

Even though Mumbai Indians have picked Jofra Archer, he won’t be available before IPL 2023, while Suryakumar Yadav is doubtful for the first match atleast.

RCB is set to miss the services of Australian batsman Glenn Maxwell, who has his marriage planned for this month. Josh Hazlewood and Jason Behrendorff are the other Aussies who won’t be joining the squad before April the 6th.

Delhi based franchise will be missing David Warner and Mitchell Marsh for atleast the first two to three matches. Lungi Ngidi and Mustafizur Rahman will miss the first match as they were part of the South Africa vs Bangladesh ODI series, while there is still doubts of Anrich Nortje’s availablity, as he is recovering from injury, but is already inside the DC camp.

SRH will miss the services of Australian pacer Sean Abbott for the first couple of matches and will be available after 6th April only.

Kagiso Rabada will miss the first match as he was also a part of the South Africa vs Bangladesh ODI series. Jonny Bairstow is also set to miss atleast two matches, as he is a part of the England Test squad that is currently series against West Indies.

One of the two new franchises, Lucknow Super Giants suffered a blow as Mark Wood was ruled out for IPL 2022, who now has been replaced by Andrew Tye. Jason Holder and Kyle Myers will be only available after couple of matches, as they are part of the West Indies squad that is currently playing England. Marcus Stoinis is part of the Aussie squad for the Pakistan series, thus, will be available after 6th April only.

Rahmanullah Gurbaz has been named the replacement of Jason Roy after the latter pulled out of the competition. Alzarri Joseph will miss starting one or two matches as he is currently part of the West Indies squad for the series against England.