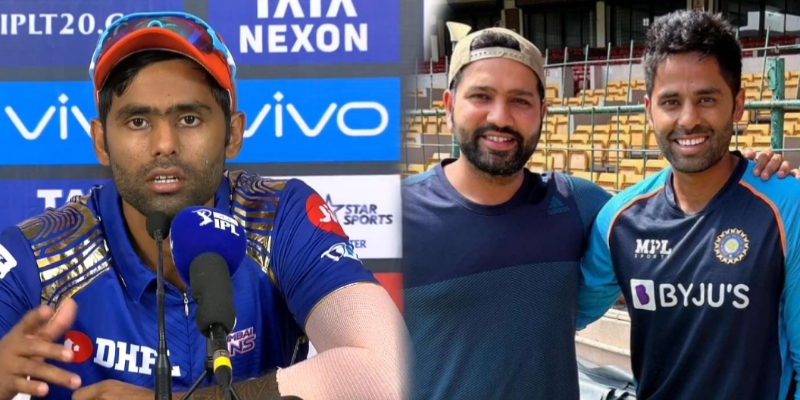 After consistent performances in domestic cricket and the Indian Premier League (IPL), Suryakumar Yadav finally made his T20 International debut against England in March 2021.

Not only this, a few months later, he also played his first international match against Sri Lanka in ODI format where he scored 31 not out off 20 balls and helped India win the match. Yadav recently made a big statement regarding the inspirational speech given by Rohit Sharma and his first Ranji match.

Yadav recalled his 30th birthday celebrations during IPL 2020 in UAE. After cutting the cake, it was seen in a video shared by Mumbai Indians (MI) that Rohit asks him to work harder and sends a message that he is not far from the India cap. Yadav further said that Rohit has always been his support, and wants him to keep scoring runs.

Suryakumar Yadav said in the YouTube show ‘Breakfast with Champions’ that, Rohit Sharma first wished him Happy Birthday and then told him to keep working and that he is not far from getting the India cap. Surya further said that Rohit Sharma has always supported him.

He said that Rohit has always inspired him to work hard and always say that whenever you score, repeat it again in the next game, do this again and again and knock on the door for selection, if the door does not open then break it.

Suryakumar said, “keep knocking that door of selection if it doesn’t open, break it down.”

He further added that Rohit was batting with him when he (Suryakumar) made his debut in domestic cricket and from then till today, there has been no change in the way Rohit always motivates the players.

He said that Rohit’s attitude on the field and his way of motivating the players has not changed. He also said that if he closes his eyes and thinks of Rohit, he still remembers that Ranji Trophy season of 2010/11.