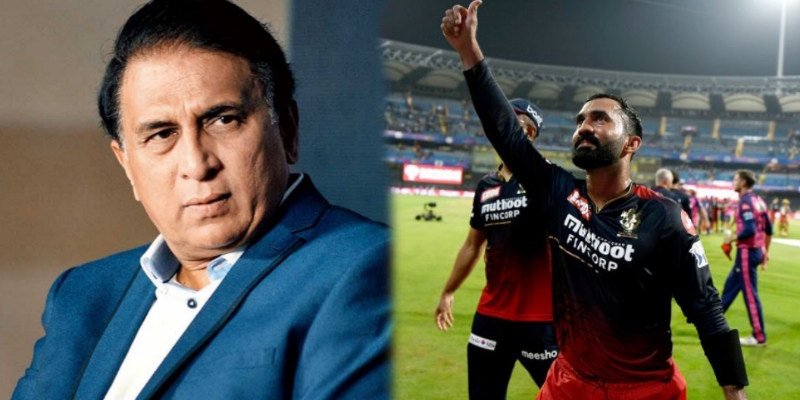 Indian Premier League (IPL) 2022 is dominated by many Indian players this time around as many players are playing their first IPL season, whereas, there are many players who want to show all the people with their game that still they can not only make a comeback in the Indian team by performing but also help their team in difficult situations.

Dinesh Karthik is best example of that, the veteran wicketkeeper batsman, playing for the Royal Challengers Bangalore (RCB) team, has surprised everyone with his performance. This time Karthik is performing better than the last several seasons. He has played vital role in all of matches for RCB this season.

Former Indian cricketer Sunil Gavaskar also feels that Karthik is all set for this year’s T20 World Cup 2022 and with such a performance, he can become a part of the Indian team once again.

If we talk about Karthik’s IPL form this year, then Karthik has played a total of 6 matches with the Bangalore team and in those matches, Karthik has remained not out in 5 out of 6 matches, not only that, he has scored at a strike rate of 209.57.

Karthik’s best score of this season is 66 runs in 34 balls, due to which Bangalore easily beat Delhi and won the match by 16 runs.

Sunil Gavaskar stated during a conversation with Star Sports that, Dinesh Karthik himself has said that he wants to be a part of the Indian team in this year’s T20 World Cup in Australia.

Reacting to that Sunil Gavaskar stated that Karthik should definitely be included in the team without looking at the age. He added that he is the perfect batsman to play at number 6 or 7 in the T20 World Cup.

“He said he wants to be a part of the Indian Team for the T20 World Cup. So what I am saying is don’t look at his age, just look at what he’s producing,” stated the former India captain.

Let us tell you that Dinesh Karthik was last seen playing for India during the 2019 ODI World Cup in the semi-final against New Zealand.

He was not included in the T20 World Cup squad last year and as a result he switched to commentary duty.