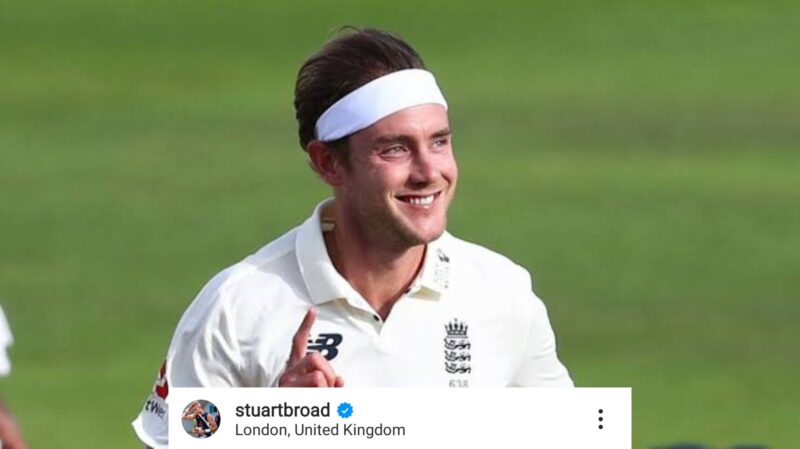 After the rain god’s interference on the fifth day’s play, the 1st of the five-match Test series between India and England ended in a draw at the Trent Bridge stadium.

The 2nd Test match between both the teams is set to be played today, on the 12th of August. However, the England team has received bad news heading into the match as their one of the star pacer Stuart Broad has been ruled out for the 2nd Test match and the entire series and the summer.

The seasoned English fast bowler Stuart Broad has been ruled out for the entire series against India and the rest of the summer of cricket in England because of a calf injury. During the warm-up session before the second Test match against India, Broad suffered an injury. It has been confirmed as a grade 3 tear in his calf, confirmed by Scans.

Stuart Broad shared a heartfelt message of his present situation to his fans through his authorized (Official) Instagram handle. He expressed his disappointment as he won’t be able to further contribute for England in the Test series against India. He also disclosed that his main goal is to achieve optimum fitness for the Ashes in the winter.

I landed a bit awkwardly on my right ankle: Stuart Broad

A portion of Broad’s post reads, “During the warm up, I jumped a hurdle, landed a bit awkwardly on my right ankle then the next step felt like I’d been whipped by a rope as hard as you can imagine on the back of my leg. Scans say Grade 3 calf.”

It further reads, “Season over & gutted to miss this India Test Series but a huge focus on Australia now. Going to take my time, no rush, baby steps and be the fittest I can be heading out there.”

As a substitute for the afflicted Stuart Broad, the England Cricket Board (ECB) has brought young pace bowler Saqib Mahmood. Throughout the recent series against Pakistan, he impressed everyone with his swing bowling. He managed to pick up nine wickets in the 3 ODI matches that England played against Pakistan.

He also excelled in the T20I’s as he got four wickets in 3 matches but proved a little expensive. But with the ability to swing the ball, he might turn out a sign of danger for India with the red ball, as the young pacer has 65 wickets to show in 22 first-class games.

India and England will take the field today at the iconic Lord’s cricket ground after rain washed the fifth day’s play resulted in a draw in the 1st Test match at Trent Bridge in Nottingham.