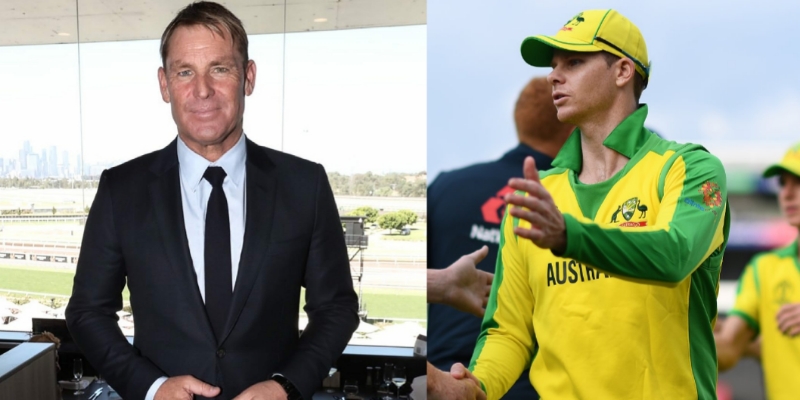 Australian Cricket legend and one of the most decorated bowlers of his generation, Shane Warne has recently made a bold statement. That the experienced contender Steve Smith shouldn’t be in the team, even though he loves the top-order batsman.

Social Media, especially Twitter, has given a platform to every individual to voice out his or her opinion. The leg spinner took to Twitter to express emotions after Australia’s loss against mighty England.

Australia was put in to bat by the European giants. Losing early wickets, they only managed to put up a 125 on the board. Australia made an unexpected change, leaving in-form All-rounder Mitchell Marsh out for Ashton Agar. Australian top-order stumbled with a string of single-digit scores. Finch played much-needed innings of 44, while there were late flourishes from Agar, Cummins, and Zampa.

Smith shouldn’t be in the team

Disappointing selection from Australia leaving Marsh out & Maxwell batting in the power play (he should always come in after power play). Stoinis should have gone in. Poor strategy & tactics from the Aussies. I love Smith but he shouldn’t be in the T/20 team. Marsh has to be !!

Warne was left disappointed by the approach that the Kangaroos took right from the team selection. He believes that Mitchell Marsh should not be dropped, and Steve Smith does not find a place in the starting XI. Shane loves Smith as a player, nonetheless.

He added that Glenn Maxwell should have not gone out to bat in the power play. Maxwell plays the spin well, and so should’ve batted down the order. Moreover, Stoinis should’ve gone earlier than he did.

All in all, it was a poor display of performance, strategy, and tactics by the team from Down Under in a highly crucial match against England. This has affected their net-run rate, which could prove to be decisive in the later stages. A win here would almost seal their place in the knockout stages of the competition.