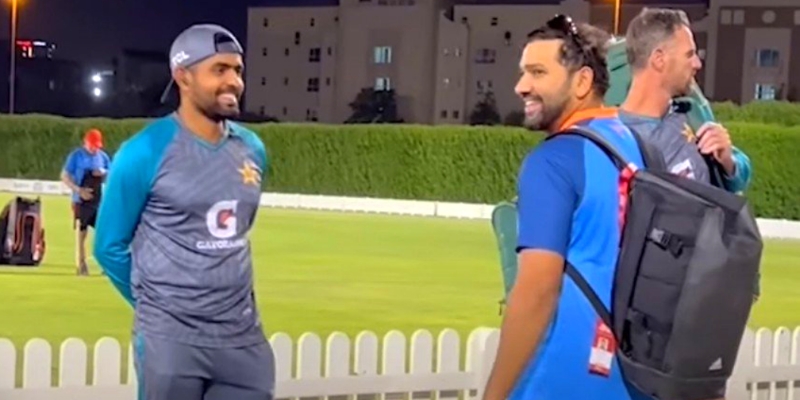 On August 28th, in the Asia Cup 2022 tournament, the match between India and Pakistan will be played at the Dubai International Stadium. Prior to this match, the captains of both the teams were seen having a candid conversation after the practice session where the Indian captain jokingly asked Pakistan captain Babar Azam to get married.

Both the teams and the fans are eagerly waiting for the match. Along with that, all the players have been captured talking to each other prior to the match. Just a few days ago, a video of Babar Azam and India’s star batsman Virat Kohli got increasingly viral on social media.

Simultaneously, the Indian players were also seen interacting with the injured Shaheen Afridi, who is accompanying the team to the tournament. After the practice session on 26th August, Rohit and Babar were seen chatting with each other.

The video has been shared by Pakistan Cricket Board (PCB) in its official Twitter handle. In this video, Indian captain Rohit Sharma is seen telling Babar Azam that he should get married. Rohit Sharma said, “bhai, get married,” in which Babar shook his head and said, “No, not now.”

🐣Babar Azam – "no, not now". pic.twitter.com/FGvZdpDiHs

This is the first match between the two teams after the T20 World Cup 2021. Let us tell you, in the T20 World Cup 2021, Pakistan defeated India by 10 wickets. The biggest thing is that the same match was also played at the same venue. Now, at the Dubai International Cricket Stadium, Pakistan will again go down to repeat history, the same Indian team would like to take revenge by winning this match.

Somewhere the good thing for India is that Shaheen Afridi is not playing in this tournament due to injury. Let us tell you, in the T20 World Cup 2021, Shaheen had performed brilliantly and troubled India’s top order batters a lot.

On the other hand, the good thing for Pakistan is that Indian fast bowler Jasprit Bumrah is also not playing in this tournament due to injury. While Pakistani fans would like Babar Azam to continue his stellar form and bat well against India, Indian fans would like to see Rohit Sharma and Virat Kohli score big runs.

“Not a fan of anyone but Virat” – Watch: Virat Kohli’s humble gesture to a Pakistani fan on demand of selfie
Watch: Bowler pulls-off a huge prank during live game; pulls down umpire’s track pant
To Top