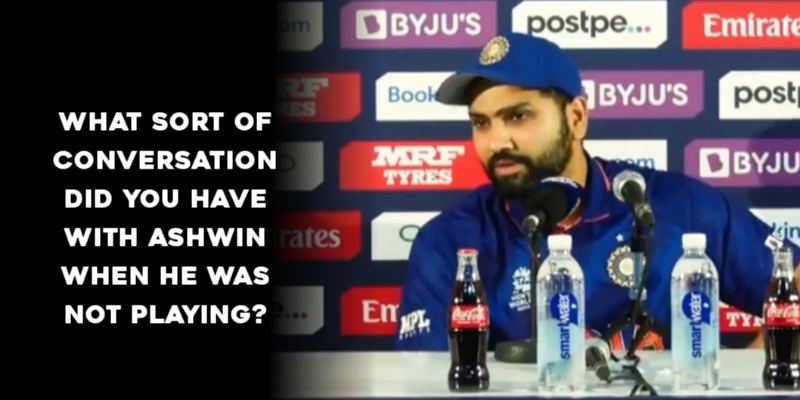 The current vice-captain of the Indian T20I team, Rohit Sharma has a good sense of humor. The Hitman has frequently showcased it during the press conferences when he interacts with the reporters. Recently, Sharma attended the post-match press conference of the ICC T20 World Cup 2021 match between the Indian cricket team and the Afghanistan cricket team.

Contributions from Hardik Pandya and Rishabh Pant powered the Indian cricket team past the 200-run mark. The Afghanistan cricket team’s batters could not score big against the Indian bowlers. Eventually, the Mohammad Nabi-led outfit lost the match by 66 runs.

The conversation between me and Ashwin throughout the UK tour was that where we should take our kids: Rohit Sharma

Ravichandran Ashwin made a comeback to the Indian T20I team yesterday night in Abu Dhabi. He played his first T20I since 2017 and picked up two crucial wickets in his four economical overs. When asked about the conversations he had with Ashwin during his time on the benches, Rohit replied:

“The conversation between me and Ashwin throughout the UK tour was that where we should take our kids. Which park do we take them to? We didn’t have any conversation about cricket, to be honest. He has got two beautiful daughters, I have got a daughter as well; so, we’re only discussing that which theme park we should be going to during our off time.”