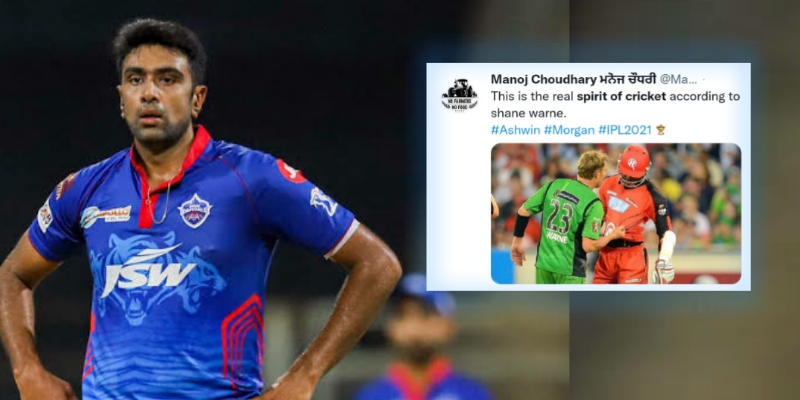 The “Spirit of Cricket” discussion is trending at the moment. Most of the fans and experts on Twitter have already started taking sides in the issue. All of it started with the Kolkata Knight Riders and Delhi Capitals IPL game recently. We take a look at the Twitter reactions pertaining to the discussion in this article.

“Spirit of Cricket” debate has picked up steam

On Tuesday, Kolkata Knight Riders and Delhi Capitals met in the UAE leg of IPL 2021. DC was batting first and they were struggling to get going. At the back end, Rishabh Pant and R Ashwin were putting on a partnership when the incident happened. A ball thrown by a KKR fielder hit a DC batsman and it went for an overthrow. R Ashwin called for the run and then completed it.

A few balls later, R Ashwin got out and Tim Southee had a few words with him. Eoin Morgan, too, joined the party. As revealed by Dinesh Karthik, Morgan was apparently unhappy with R Ashwin’s decision to take a run after the ball hit the batsman. This has now set a wave of discussion on whether Ashwin was right in what he did.

Although within the rules of the game, a few felt that Ashwin should not have taken the run. Few players, including the likes of Shane Warne, went too far with their criticism. Warne said that the act was “disgraceful”. Former Indian cricketers such as Virender Sehwag took Ashwin’s side. The former opener said that in the final of the 2019 World Cup, England won the game only after the ball went to the boundary after hitting Ben Stokes’ bat. Even Gautam Gambhir and Aakash Chopra supported Ashwin’s decision. The off-spinner himself came out on Twitter and explained why he took the decision. In this article, we take a look at a few more reactions to this topic.

On July 14th , 2019 when it ricocheted of Ben Stokes bat in the final over, Mr Morgan sat on a Dharna outside Lord’s and refused to hold the World cup trophy and New Zealand won. Haina ? Bade aaye, ‘doesn’t appreciate’ waale 😂 pic.twitter.com/bTZuzfIY4S

This Ash vs Eoin debate is a whole different level, pause for a moment, 4 days ago the insiders in the cricket fraternity had a problem with a batsman punching the air after hitting a 6. Don’t understand what they want, 1 day it’s enjoy the sport, 1 day it’s spirit of the game.

This is the real spirit of cricket according to shane warne.#Ashwin #Morgan #IPL2021 pic.twitter.com/3eKeJcUftt

I want a horror movie made around a cricket match. Basically something that haunts a ground or whatever.

They can call it the Spirit of Cricket.

Cricket's first law: arguments with the 'spirit of cricket' at their foundation are bogus arguments

Sure, Morgan and Stokes didn't have much choice in taking those four runs at Lord's that day.
Given Morgan's deep belief in the spirit of cricket, there could have been some statement acknowledging the tremendous luck involved and calling for the laws to change.
Was there one?

This will be the opening chapter in the book of 'Spirit of Cricket'#CricketTwitter pic.twitter.com/reVo2Zz6Bg