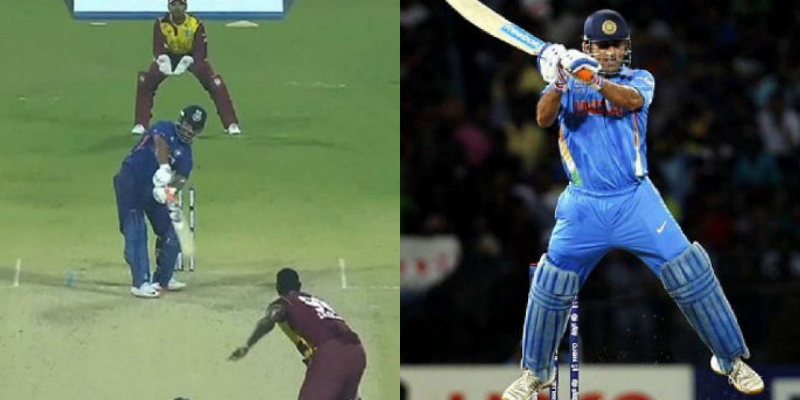 Indian cricket team picked up another win over the West Indies team in the 2nd T20I match of the 3 match series to also register the series win with 1 match still to be played. Meanwhile, the match’s hero Rishabh Pant gave a delight to everyone after executing a ‘Helicopter Shot’, made famous by MS Dhoni.

The Indian team registered a 8 runs victory over the West Indies cricket team in the 2nd T20I played in Kolkata. Wicketkeeper batsman Rishabh Pant was hero of the match, scoring a quickfire 52 runs from 28 balls.

He also formed a great partnership with the all-rounder batsman Venkatesh Iyer, who himself showcased his hitting ability, scoring 33 runs from 18 balls. But it was Rishabh Pant whose inning turned very crucial.

But, other than that, the Delhi batsman also gave a delight to Indian fans when he struck a beautiful ‘Helicopter Shot’ on the first ball of the 19 over.

To make it even more delightful, he did just that single handedly. ‘Helicopter Shot’ is made by famous by another legendary Indian wicketkeeper batsman and former India captain MS Dhoni. It was a huge delight for the fans to see the glorious shot once again, even if it came from someone else.

Rishabh Pant is here to rule 💙👑

Talking about the match, Indian team posted 186 runs on the board in their restricted 20 overs after Kieron Pollard asked the Men in Blue to bat first.

Ishan Kishan departed early as we saw a fifty plus partnership between Rohit Sharma and Virat Kohli, before Rohit was dismissed for 19 runs. Virat Kohli went on to score 52 runs of 41 balls.

But the finish touch was given by the duo of Rishabh Pant and Venkatesh Iyer, who both added 76 runs as Rishabh scored 52 while Iyer scored 33 runs.

Indian bowler failed to take many wickets, but ensured that Team India win the match. West Indies could only score 178 runs, but only lost 3 wickets. Nicholas Pooran and Rovman Powell both scored over fifty plus score individually, but couldn’t manage to finish the match.

The trio of Bhuvneshwar Kumar, Yuzvendra Chahal and Ravi Bishnoi, all bagged 1 wickets each. The third match of the series will be played on the 20th February on Sunday at the very same venue in Kolkata.