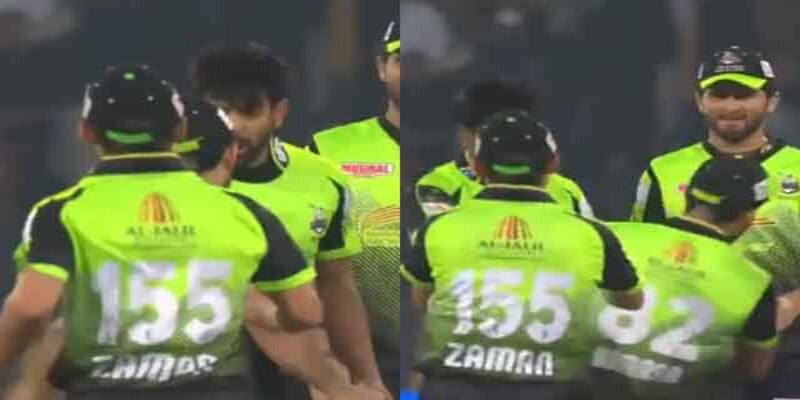 Pakistan Super League 2022 is getting more interesting day by day as it is going into the final stage. Daily basis there is something exciting for fans, whether it is on-field or off-field. And the excitement level is increasing with every match. We have seen Shaheen hitting four sixes in an over, Faulkner accusing PCB for non-payment issue, overseas players leaving the PSL midway. There have been a lot of things happening. But among all these, some unexpected things happened during the match between Lahore and Peshawar on Monday.

And the incident took place in one of Haris Rauf’s over when Kamran Ghulam dropped the catch of Hazratullah Zazai. The Pakistan speedster didn’t look happy with the effort of his teammate. But eventually, it didn’t cost much for the team, as just after two balls, Zazai got out. All the players came to congratulate Rauf on his wicket. However, Kamran Ghulam also ran up to him for a high-five, but instead of doing that, Rauf slapped him.

And this happened in front of all the players, including the match umpires in the middle of the field. It didn’t look like he did it in a funny way. And the video of this incident went viral on social media in seconds. Fans didn’t like it at all. And ex-cricketers didn’t seem happy with that celebrations and asked the PCB to take some action.

However, the Pakistan Cricket Board is yet to take any action, even though the match officials gave just a formal warning to Rauf. Despite that incident, the match was a nail-biter and ended in a tie thanks to the heroics of Shaheen Afridi. Needing 24 off the last over and with only two wickets in hand, Shaheen smashed 23 runs off the last over. And it went to the super over, the first Super Over of this season.

It was Peshawar who won at the end, especially skipper Wahab Riaz, who had just given five runs in the super over. And Shoaib Malik scored two boundaries in the first two balls and won it for Peshawar Zalmi.