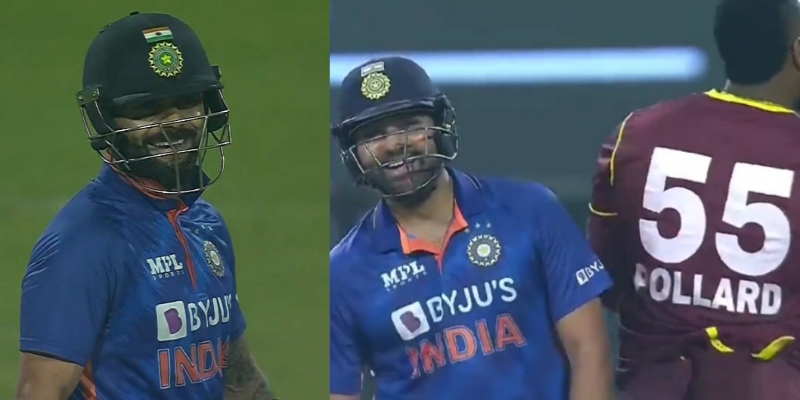 The men in blue recorded 2nd win in the T20I series as Team India defeated West Indies by 9 runs to also win the series, after winning the 1st T20I as well of the scheduled 3 match series.

Rishabh Pant was the hero of the victory last night as he performed really well in India’s victory and played an important role in turning the tide of the match by scoring 52 runs off 28 balls with his quickfire batting.

Pant also got great support from Venkatesh Iyer down the order as this made all the difference in the match while Pant was awarded with the Man of the Match award.

After putting a challenging score of 186 runs for the loss of five wickets in their respective 20 overs, Indian bowlers showcased their brilliance, not allowing West Indies batsmen to get them over the line as West Indies team could only manage 178 runs for 3 wickets in their respective 20 overs. India won the match and has now taken an unassailable 2-0 lead in the series.

Another great moment from the match caught eyes of fans. While Virat scored a half-century, on the other hand, he did something during his batting that the video has surfaced on social media.

What really happened was, when Kohli was batting on 30 runs and Rohit Sharma was at the crease with him. At the same time, the third ball of the 8th over by Roston Chase, Kohli hit a straight shot on that went on to hit Rohit standing on the non-strike end, the ball started going towards the non-strike stump as soon there after. In such a situation, seeing the opportunity, the bowler took the ball and attempted to run out the hitman, although by that time Rohit had already reached his crease.

After this, stump mic caught Virat taking a jibe at West Indies captain Kieron Pollard and said, “You can’t run him out like this, Polly”. Captain Pollard started laughing after listening to Virat, while Indian captain Rohit Sharma also laughed.

Virat Kohli to Pollard when he was trying to run out Rohit in a funny way.
"YOU CAN'T RUN HIM LIKE THAT POLLY" pic.twitter.com/XasccpaEe5

Virat Kohli is known for his aggressiveness on the pitch and have been caught murmuring a lot of times on stump mic and that has really made Virat Kohli something really special.