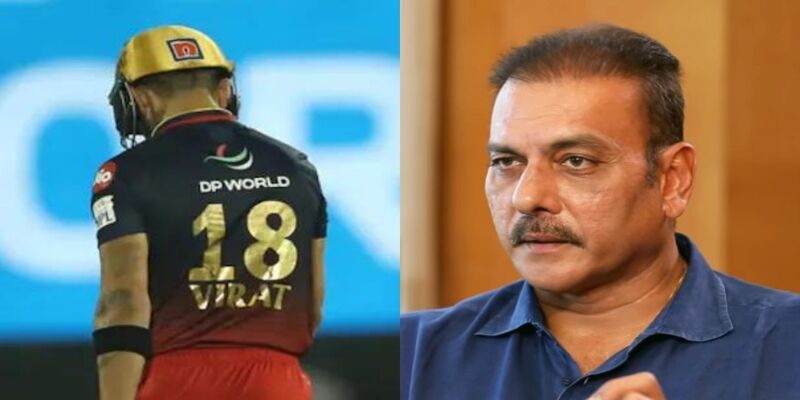 On Tuesday, RCB faced their fourth loss of the season at the hands of Rajasthan Royals. And again, it was their batting failure that let them down. Chasing a below-par target of 145, RCB got all out for 115 runs and lost the match by 29 runs. However, Bangalore made a few changes at the top. They dropped Anuj Rawat and it was Virat Kohli who opened the innings along with Faf du Plessis. However, it again didn’t go well for the former RCB skipper. He was coming off two golden ducks in his last two matches, was dismissed for just 9 runs.

It was yet another failure for him. He has now just managed to score 128 runs in nine innings this season. Many ex-cricketers have given their suggestions for Virat to take a break. Once again, Ravi Shastri, who has already said that Virat needs a break, once again said this in this matter. During a conversation with Jatin Sapru on his YouTube channel, Shastri said that after playing non-stop cricket, it will be ideal for him to take a break.

He said that it is a wise decision to take a break. If he wants to prolong his international career for another 5-6 years, he needs to balance everything. As he is already in a long IPL tournament. Shastri added, “if push comes to shove and you want to prolong your international career and make a mark there for 6-7 years, pull out of the IPL, for all you care.”

He also said that it is not for Virat Kohli, and whoever wants to represent his country for a long period needs to draw a line and make a tough decision. As the ideal time will be off-season and India don’t play any international cricket during the IPL, it is the ideal time. He also stated that one can tell the franchise that he will play half of the season, so pay him half. But if you need to reach the top of your career, you need to make those harsh calls.

The former head coach also added that there are another 5–6 years of cricket left with Virat. Pointing out his form, he said that he would know about his lean patch because he knew how to get back and needed to do it again from the start. He also highlighted that everyone goes through this thing in their career. There is no worry about getting out of the first ball. Shastri concluded, “It is when you get in and throw it away that is more disappointing. When he gets in, it is up to him to make it count.”