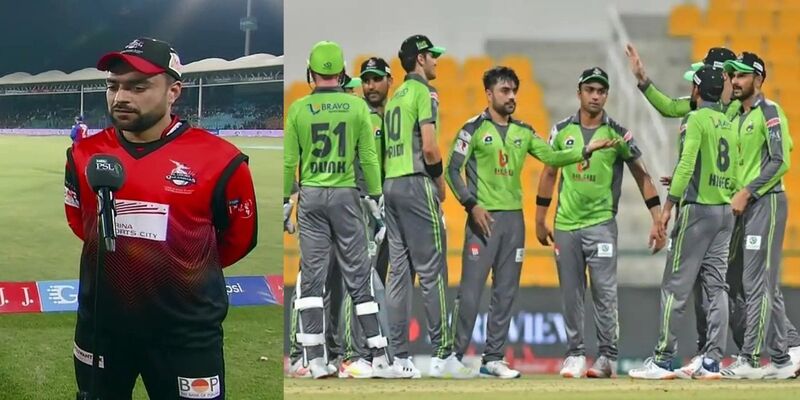 Rashid Khan is one of the most well-known names in cricket. The Afghan superstar is one of the few players in the world who plays in almost all the cricket leagues in the world. Recently, he was part of the Lahore Qalandars’ playing XI in the Pakistan Super League 2022. He is admired by fans all over the world. And it was also seen that in his last match of the PSL 2022 season, his Lahore teammates gave him a special farewell by thanking him with a “ring of honors”.

However, the leg-spinner also seemed very thankful to the Lahore Franchise and expressed his feelings of gratitude by playing for them in the tournament. As we all know, the PSL also chooses players on the basis of a draft system, and there is no auction for the players. And the highest category for any player is the Platinum Category in the Pakistan Super League. Babar Azam, Mohammad Rizwan, Shadab Khan, and Rashid Khan all fall into the Platinum category for the price of INR 1 crore.

Rashid stated that he would prefer to play for Lahore Qalandars in the PSL regardless of his category. He also said that he is fine if the franchise picks him in the lowest category as well. The Afghanistan star stated on the franchise’s YouTube channel that he had told the manager of Lahore (Sameen Bhai) prior to the game that the draft category was not his priority. He further said, “if he picks me in the lowest category, he needs me in that category. I will make sure I will be available in that category.”

Shaheen led Lahore has already qualified for the playoffs of the PSL. But it will be hard for them to fill the boat with Rashid in the knock-out matches. The leg-spinner left the PSL to complete his country’s duties. Afghanistan is touring Bangladesh for the white-ball series. And the spinner in the integral part of Afghanistan at the international level.

The Afghan team didn’t win a single game in the previous ODI cricket World Cup. So in order to qualify for the next ODI World Cup, they have to perform out of their skins now.