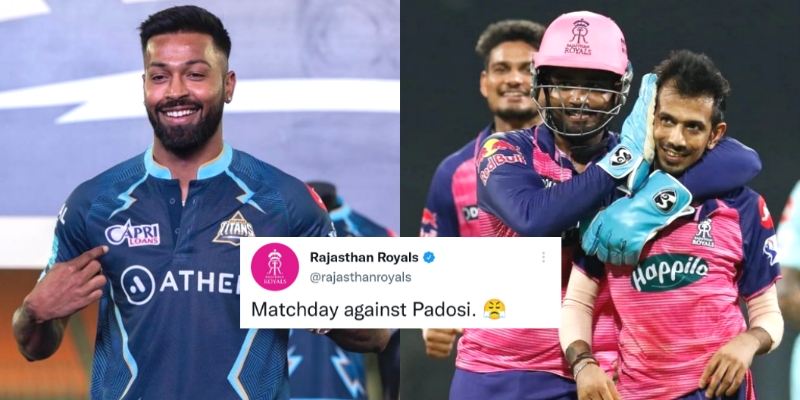 Two of the most strongest teams in the Indian Premier League (IPL) 2022 faces off tonight as league leaders Rajasthan Royals takes field today against Hardik Pandya led Gujarat Titans, on the 14th of April.

Match number 24 of the Indian Premier League (IPL) 2022 is to be played tonight, on the 14th April, between Rajasthan Royals and Gujarat Titans, both have 6 points from their first 4 matches.

But before the Sanju Samson led Rajasthan Royals and Hardik Pandya led Gujarat Titans take the field tonight, both the team tangled into a social media warfare.

The Rajasthan based franchise posted a match post on their social media with the pictures of famous Indian television serial characters. Under that same post, Gujarat Titans posted a funny comment.

Here, the clear indication from the Gujarat based franchise is on the tradition of the IPL 2022 so far, where most of the teams opts to bowl first due to dew factor and eventually wins the match. So through their post, they clearly meant that Rajasthan should bat first, which eventually end up with the match in their favour.

So far, both the teams looks solid candidate for the playoffs. Both of them have played 4 matches and has won 3 matches and has gathered 6 points from those. While Rajasthan Royals sits at the top of the IPL 2022 Points Table, Gujarat Titans is placed 5th place due to net run rate.