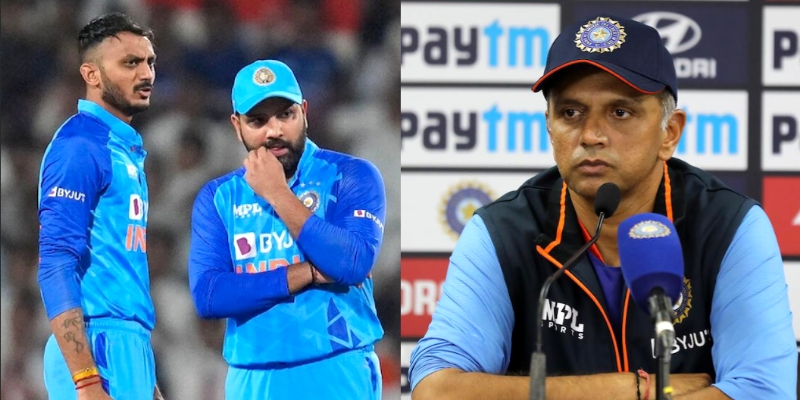 The Indian team had to face defeat badly in the last match of the T20I series against South Africa. In the match played at the Holkar Stadium in Indore, the Indian bowlers were thrashed but the captain got only one over from left-arm spinner Axar Patel, who was playing in great rhythm.

Everyone wondered why Axar bowled only one over and this was also questioned in the press conference, to which Indian head coach Rahul Dravid gave a befitting reply and asked the journalist to explain the match-up and statistics.

Batting first, South Africa, despite cheaply losing the wicket of their captain Temba Bavuma, put 227 runs on the board for the loss of three wickets. Rilee Rossouw contributed 100 not out and Quinton de Kock contributed with 68 runs. During this, the Indian team captain Rohit Sharma gave the ball to Axar Patel for just one over, in which he gave 13 runs.

Asked about the reason behind Axar Patel not bowling as many overs, Team India Head Coach Rahul Dravid said the South African team has some explosive left-handers, so the left-arm spinner was stopped after an over. He spoke of the importance of match-ups in the competition, giving a befitting reply to the journalist at the post-match press conference.

“Match-ups are important, they are important to us. Whether they are more important or not, it’s for you guys to dig deep and look at what stats tell you about match-ups, about numbers of left-hand batsmen against left-arm spin. Maybe you might get some answers to that,” Dravid said.

With that, all the preparations are over for the Indian team as they are now ready to board the flight to Australia for the T20 World Cup 2022, to be played from the 16th of October with India kicking-off their campaign on the 23rd of October against Pakistan.

ICC confirms list of 20 Match Referees and Umpires for T20 World Cup 2022; Only one representative from India
Here’s how Suryakumar Yadav became Number 1 T20I batter for just 2 days
To Top