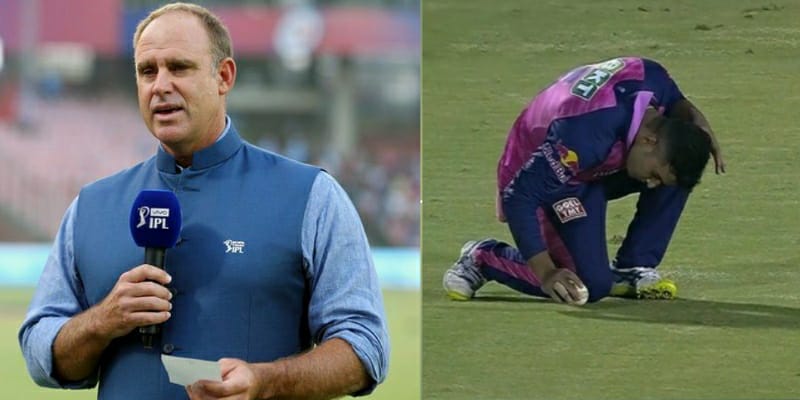 Rajasthan Royals beat Lucknow Super Giants to move into second place in the IPL 2022 points table, putting them one step closer to the playoffs. RR now has 16 points after the win, with one match remaining. Yashasvi Jaiswal scored 41 runs, while Trent Boult led the RR attack with the ball. Former Australia cricketer Matthew Hayden, who was commentating at the time, was not pleased with an event that occurred during LSG’s chase.

Marcus Stoinis smashed a delivery towards the deep midwicket zone during Obed McCoy’s 19th over, but it didn’t get the best of connections. Riyan Parag, who was stationed at long-on, ran and appeared to make a fantastic catch. The third umpire, however, determined that the ball had bounced shortly before Parag completed the grab after reviewing the footage.

Stoinis looked for another huge smash in the following over, but he skied it again, and Parag completed a routine catch to send the Australian packing. Parag gave a cheeky celebration after catching the ball, motioning as if he had caught it just above the turf.

Hayden, who was on-air at the commentary, was not pleased and said: “Got some advice for you young man, cricket is a very very long game, and we all have very long memories and you never ever tempt fate because it comes around quick enough.”

Parag has been a lightning rod on the field this season, with 13 catches to his credit, the most by an outfielder. The 20-year-old, on the other hand, has struggled with the bat. He has appeared in all 13 of RR’s matches this season, but has only scored 154 runs at a 17.11 average.

Parag has appeared in 43 IPL matches, accumulating 493 runs at an average of 17 and a strike rate of 126.41, with only two half-centuries to his credit. Rajasthan Royals will play their last league match against Chennai Super Kings on 20th May at the Brabourne Stadium in Mumbai.