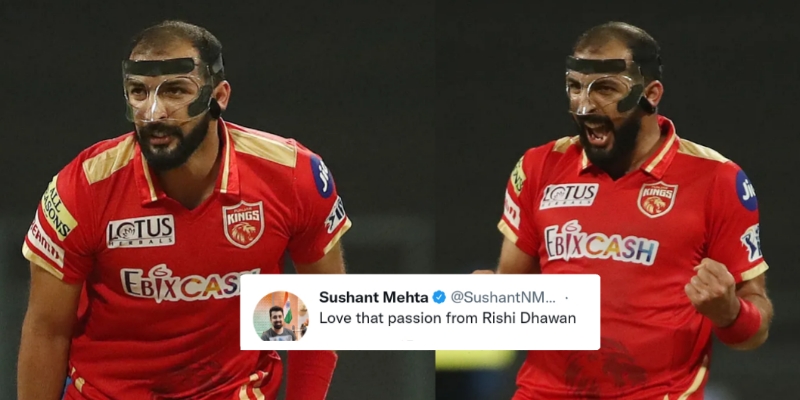 Rishi Dhawan is playing an IPL encounter after almost six years. The Himachal Pradesh all-rounder last played an IPL game in 2016. When Rishi arrived to bowl, he was seen wearing a faceguard, which surprised many. In this article, we take a look at how Twitter reacted as Rishi Dhawan sports a faceguard while bowling against CSK.

Rishi Dhawan sports a faceguard while bowling against CSK

In the recent Ranji Trophy, Rishi was hit on his face and later had to be taken to the hospital. Hence, in order to be on the safer side, the all-rounder used a faceguard while bowling in today’s game. It was a rare occurrence and the decision was the right one from Rishi’s perspective. He has had a good day so far, especially after taking the wicket of Shivam Dube.

It is not often that a bowler wears a faceguard. Hence, Twitter was brim with many reactions about the same. Here is a look at a few of them:

For all those wondering why Rishi Dhawan is wearing a face guard : Rishi Dhawan has a nose injury, he dislocated it when a ball hit him during practice and had to go through a minor surgery. To protect it from any further risk of damage, he is wearing it. #PBKSvCSK

Good on Rishi Dhawan to be wearing a face shield. Was hit on the face by a ball on his follow through during the second round of Ranji Trophy. Had to be taken to hospital for scans.

When batters can wear so many protective gears, why can’t bowlers at least protect their head? And to those thinking it’s funny, it’s not! It’s just another safety measure! #PBKSvsCSK

Love that passion from Rishi Dhawan

Are Rishi Dhawan, for a moment I thought he wore a gas mask 😂