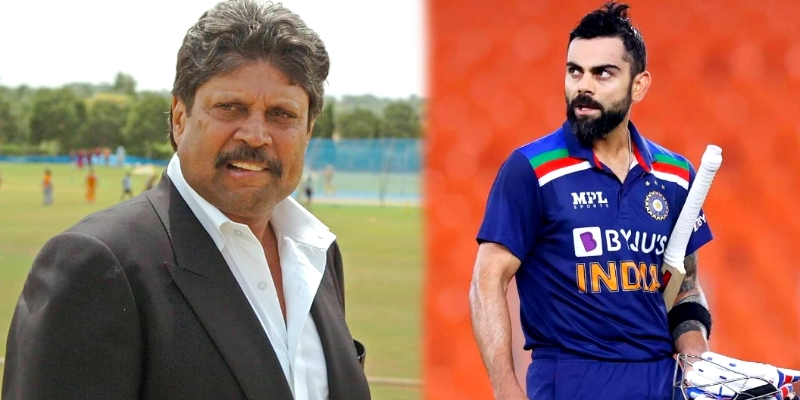 Former Indian World Cup winning captain and legendary all-rounder Kapil Dev has said that he is hurt seeing Virat Kohli struggle for run after a string of very poor performance from the former India captain.

Virat Kohli is one of the greats of the game that we all love, cricket. But, the batter is struggling with a very bad run of form from the last couple of years. He, who once was known for his brilliant century scoring spree, has not scored a single Hundred ever since the 2019 Day/Night Test match against Bangladesh.

Virat’s been struggling to play the big inning, whether it is the International cricket or it is the Indian Premier League (IPL). Many has criticised the batter while many has suggested him to take a long rest away from cricket.

And now, former India captain and 1983 World Cup winner Kapil Dev has spoken on Kohli. While speaking on Uncut show, Kapil said that it hurts him to see a big player like Virat Kohli go through a long run with a Hundred. It pains me to see such a big player go through such a long gap without a century,” said the all-rounder.

He further added that never did ever anyone thought that they will have a player whom would compared with the likes of Sachin Tendulkar, Rahul Dravid, Sunil Gavaskar or Virender Sehwag.

He said that him not scoring a century for the last two years is bothering him. “We never thought we would witness a player whom we could compare to Rahul Dravid, Sachin Tendulkar, Sunil Gavaskar, or Virender Sehwag. But then they came, and forced us to compare, and now, since he hasn’t for the last two years, it is bothering me and all of us,” signed off the legend.