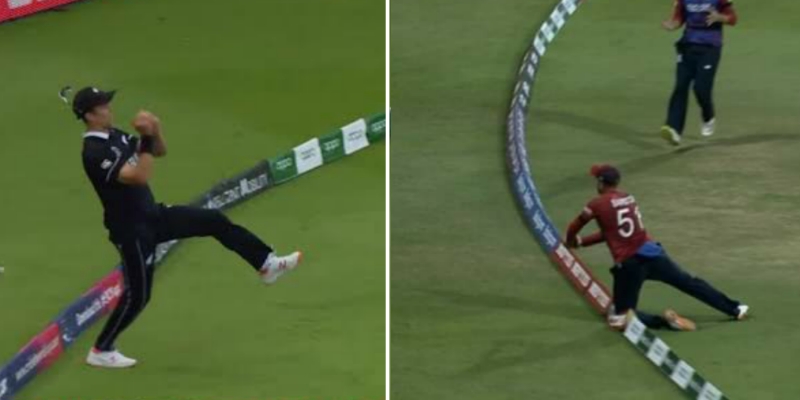 New Zealand defeated England by five wickets to enter the final of the 2021 T20 World Cup. It was a close game and it took some big hitting by the Kiwis at the end to cross the line. In this article, we take a look at how Jonny Bairstow‘s catch attempt at the ropes sparked memories of the final of the 2019 ODI WC.

Batting first, England made a respectable score of 166-4 in the first innings. The New Zealand innings started in a terrible fashion with the team losing both Martin Guptill and Kane Williamson early. Daryl Mitchell and Devon Conway then had to ensure that there wasn’t a collapse. They did it, but the team needed momentum to actually go for the target. Jimmy Neesham, with a well-made 27 of 12, provided that. Daryl Mitchell was the star of the game with 72 runs from 47 deliveries. Having entered their first-ever T20 WC final, New Zealand will face either Pakistan or Australia in the summit clash.

In the 17th over of the chase, Jimmy Neesham lofted the delivery from Chris Jordan towards the long-on. Jonny Bairstow made a fine attempt to catch the ball, but when he knew that he could not, he flicked it to the covering fielder. However, he had touched the ropes and hence, it was declared as a six.

It was a throwback to the finals of the 2019 ODI World Cup when the same teams had met. It was Trent Boult who played Bairstow’s role that day. Ben Stokes was the batsman and in that game, England went on to win. There were too many coincidences and viewers could not help but play back the incident in their minds.