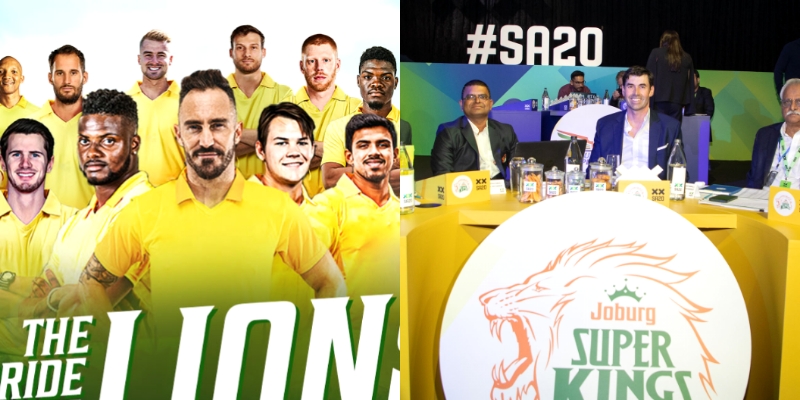 A new boy have entered the school with the intention to challenge the topper as South Africa’s various attempts to conduct their own T20 league, it seems likely to happen as the Cricket South Africa (CSA) officially conducted the player auction for the inaugural SA20 League to be played in 2023.

Looking at how influential the India’s Indian Premier League (IPL) has been to the country’s team’s development, nowadays most of countries are now conducting their own T20 league and Cricket South Africa is the latest to join in.

With a huge backing of the Indian Premier League franchises, where all the SA20 League teams are owned by the IPL franchise owners, the committee finally expects to get their T20 league up and running.

Talking of Joburg Super Kings, they are owned by one of the most successful IPL franchise owners, the Chennai Super Kings (CSK). There is also a huge expectation from the team in the SA20 League. They have also built a good team and today on this article, let’s have a look their best possible Playing 11.

The Joburg Super Kings (JSK) will be led by the former CSK player Faf du Plessis and is also likely to open the inning for the yellow army. Faf had been a part of the CSK team between 2011 and 2015 for the first stint and then from 2018 till 2021. He now plays for the Royal Challengers Bangalore (RCB) in the IPL. Alongside Faf, we are expecting South African opening batsman Janneman Malan to open the innings for JSK. Malan has so far played 11 T20Is and has scored 241 runs.

The Joburg Super Kings’ middle-order just as good as the opening duo. At number 3 we have picked Reeza Hendricks, who can also play as a opener and may swap place with Malan if need. In at number 4 we have gone with South African wicketkeeper batsman Kyle Verreynne and following next in the batting order in England’s young and explosive batter Harry Brook. However, we also have there might be rotation between Verreynne and Brook depending on the situations.

Now the all-rounders department does lack a bit for the Super Kings compare to some other teams in the league. The first choice and in at number 6 is West Indies’ Romario Shepherd. Shepherd is equally good with both bat and ball and can play some big hitting knocks. Following him up next is Nandre Burger, who is more of a bowling all-rounder who can also contribute with the bat a bit.

Joburg also have a decent bowling line-up that will be led by West Indies’ quick bowler Alzarri Joseph. Along with him, Sri Lanka’s Maheesh Theekshana will be the spin bowling bowling option while South African duo Gerald Coetzee and Lizaad Williams will be partnering them.