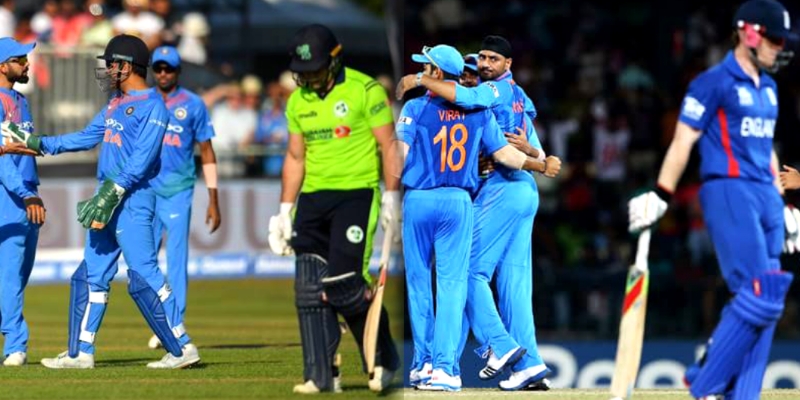 The Indian cricket team is one of the most strongest and most successful team in the history of the game. The Indian team have won the ICC Cricket World Cup twice, in 1983 and in 2011. They have also won the ICC Champions Trophy in 2013 and the inaugural edition of the T20 World Cup in 2007.

Talking about the T20 cricket. The Indian team is one of the strongest team in the shortest format of the team. With the country mad about the game and the existence of Indian Premier League (IPL), Team India has no lack of talent.

And theh displayed their strength on the International, having registered some big wins. Today, in this article, we take a look at 5 biggest margin of win for Team India by runs.

At the very top sits Indian cricket team’s win over the Ireland cricket team at their home ground in Dublin in 2018. Chasing a target of 214 runs, Ireland were bowled out for 70 runs only, giving India a 144 runs win. While KL Rahul, Suresh Raina and Hardik Pandya were the hero with the bat, with the ball, Kuldeep Yadav and Yuzvendra Chahal took 3 wickets each, Umesh Yadav got 2 and 1 each for Siddharth Kaul and Hardik Pandya.

2nd in the list Indian cricket team’s 93 runs win against Sri Lanka in Cuttack in 2018. Batting first, India posted a total of 180 runs on the board. KL Rahul scored 61 runs, while MS Dhoni and Manish Pandey both scored 39 and 32 runs respectively. Sri Lanka were dismissed for 87 runs, ensuring India’s 93 runs win.

Third in the list comes Indian team’s win over the England cricket team in the year 2012, in which, Team India recorded a 90 runs win over the three lions. Batting first, fifty from Rohit Sharma and good inning from Gautam Gambhir and Virat Kohli meant India scored 171 target for England. However, they were dismissed for 80 runs. Harbhajan Singh took 4 wickets for 12 runs in that match.

4th in the list is once again Sri Lanka, and part of the same series. Ok, let alone same series, this is just the next match after Sri Lanka lost by 90 runs in the previous match. This time, they did a little better and were handed a 88 runs defeat. Chasing a target of 261 runs, the Lankan Lions were all out for 172 runs. Rohit Sharma score a century in the match, while KL Rahul played a inning of 89 runs in the match.

A couple of years later, Sri Lanka were victim of another of India’s big margin win, this time in the year 2020. In the match played in Pune in January 2020, India handed Sri Lanka a 78 runs defeat. Fifties from both KL Rahul and Shikhar Dhawan helped India to post 201 runs on the board. While chasing the target of 202 runs, Sri Lanka got all-out for 123 runs in just 16 overs.