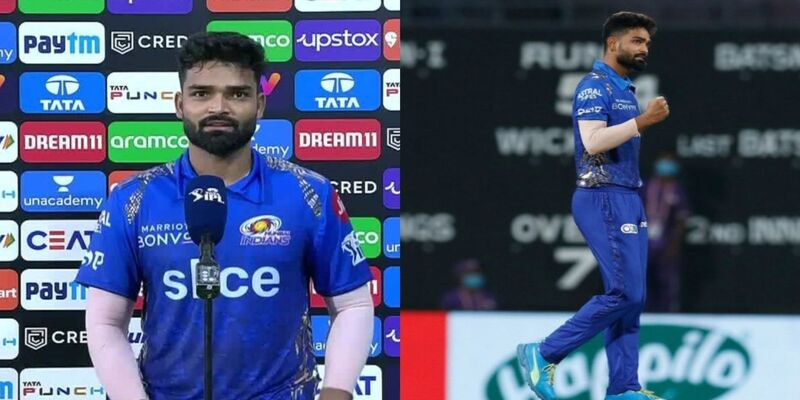 Finally, the five-time champions, Mumbai Indians, have opened their account on the points table. On Saturday, they locked horns with the inaugural season winner, the Rajasthan Royals, and came out victorious. The match went to the last over of the innings and ended with a nail-biting finish. The star with the bat was the stylish batsman, Suryakumar Yadav. He scored a match-winning half-century to help his team get over the line. In the end, MI got a cameo from Tim David and a first-ball six from Daniel Sams to get them over the line.

Suryakumar was adjudged “Man of the Match” for his performance. But one more player impressed everyone with his skills. It was none other than MI’s debutant, Kumar Kartikeya.

The debutant was impressive with his variations and the way he bowled with control. He bowled his four overs for just 19 runs and didn’t allow RR batters to score freely. He also took the vital wicket of RR skipper Sanju Samson, and dismissed him for 16 runs.

The Mumbai-based franchise signed Kartikeya as a replacement for Arshad Khan. He ot injured and then ruled out of the competition. In the very next match, the 24-year-old performed exceptionally well. He also came to know that he is a “mystery spinner.” However, he opened up about his debut match. He said that he was nervous before the match.

During a media interaction with Dainik Jagran, he spoke about his life and journey. Coming from a middle-class background, he revealed that despite his parents’ calling him home, it’s been nine years since he last visited his hometown. Kartikeya said that he aimed to visit his place only after achieving something in his life.

Kumar Kartikeya said, “My mom and dad called me frequently, but I was committed. Now finally I’ll return home after the IPL,” The five-time champions are now active on the points table. They will face the table-topper Gujarat Titans on Friday, April 6 at the Brabourne Stadium. Mumbai Indians are already out, but they will play for their pride and for their fans.