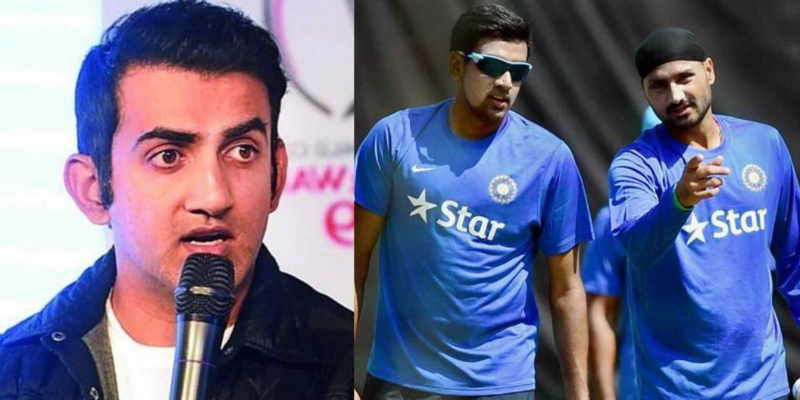 After a brilliant performance in the recently concluded 1st Test match of the series between India and Sri Lanka, Ravichandran Ashwin had a great match and overtook the great Kapil Dev to become India’s 2nd highest wicket taker in Test cricket. After which, Gautam Gambhir picked the best out of Ashwin and Harbhajan Singh.

Comparison of players are now a very common thing in cricket. Players of similar style, many legends having similar batting style or record have been compared to each other. Ravichandran Ashwin, the off-spin bowler of the Indian cricket team, has often been compared to former veteran spinner Harbhajan Singh.

Both are of them are the same type of bowler and have had a great and successful career, both having taken more than 400 wickets in Test cricket. And former Indian cricketer and opening batsman Gautam Gambhir has recently spoken out his opinion on who is better or more dangerous between Ravichandran Ashwin and Harbhajan Singh.

India defeated Sri Lanka by an innings and 222 runs in the first match of the 2 match Test series, played in Mohali. In the match, Ashwin performed amazingly and took 6 wickets combining both the innings. With this, he also became India’s second most successful bowler in the longest format of the game, leaving behind the great Kapil Dev.

Speaking about this, Gautam Gambhir said in Star Sports that Ashwin has broken the record of the great Kapil Dev, he has become the 10th bowler in the world to take the most wickets in Tests. Ashwin would have been a bowler that would have been difficult for him to face as a batsman.

He said that Ashwin’s accuracy and ability to get a better spin and change the pace is praiseworthy. However, he admitted that Harbhajan’s bowling was better to watch when he used to bowl dusra and dip the ball.

Talking about the match, India posted 574 runs on the board after the first inning, thanks to a brilliant 175 runs inning from Ravindra Jadeja, where Ashwin also contributed with 61 runs. Earlier Rishabh Pant had missed his century by 4 runs after was dismissed for 96 runs.

Sri Lanka had absolutely no answer to Indian bowlers as Jadeja took 5 wickets in the first inning and then 4 wickets in the 2nd inning. The 2nd match of the series will be played from the 12th March.