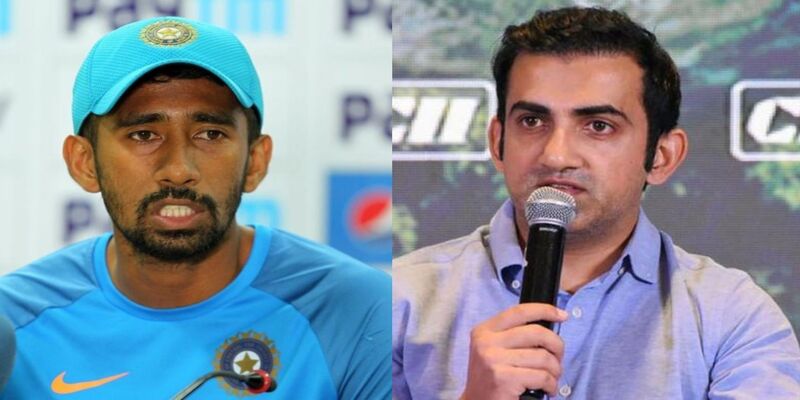 A tweet went viral on the social media platform, and all the cricket fans were stunned to learn of this. Indian test wicket-keeper Wriddhiman Saha, who was dropped from the Indian test side, shared a screenshot on Saturday. He showed a screenshot of a disturbing and rude message from one journalist, who was forcing him to do an interview.

Many ex-cricketers came out in support of Saha over the matter of that unknown journalist. Former Indian opener Gautam Gambhir also came up with a tweet supporting Saha. He said that it was an unfortunate incident and very disappointing to see all of this happening on a public platform. Former opener also pointed out that there are other better ways to ask for an interview. He added, “I’m sure there are better ways to ask for an interview! I hope better sense prevails in future.”

The veteran wicket-keeper also shared his conversation he had with BCCI president Sourabh Ganguly. And he also added that the management has made it clear to him that they would be looking at other players as a back-up wicket-keeper.

Former head coach said it’s shocking that an international player is getting threatened by a journalist. And he also pointed out that this kind of events are so often happening with players. Shastri said that the BCCI should dive in and investigate this. He further added that Saha is truly a team man and this is a serious matter against him.

Former cricketer Virender Sehwag was also among those cricketers who showed this disappointment. Sehwag expressed that such kind of people are not journalist nor respected. He also used “chamchagiri” for the journalist. The Nawab of Najafgarh tweeted in support of the wicket-keeper. He said this is totally disrespectful. You can’t call him a journalist. It’s just sycophancy.

Meanwhile, it is learnt that the Board of Cricket Control in India has asked Saha to give the name of the journalist who misbehaved with him. So that they can take further action regarding this.