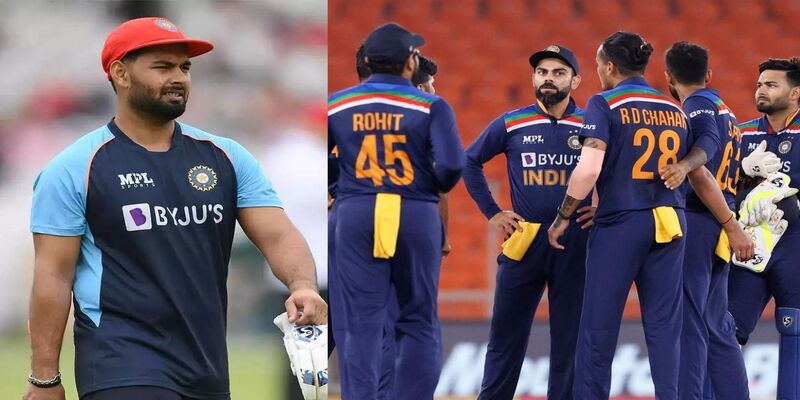 The five-match T20I series between India and South Africa ended in an unfortunate way with the fifth match being abandoned due to rain. As a result, both teams shared the series after winning two matches each. But the Men in Blue had some positive performances throughout the series. Both the comeback men, Hardik Pandya and Dinesh Karthik, performed as per the expectations.

But one man who found it difficult was the stand-in skipper, Rishabh Pant, who had a below-average season. Thus, he faced a lot of criticism from many former cricketers and cricket pundits. As we all know, the T20I World Cup is around the corner and India are looking to find the right combination. But after the performance of Pant, many doubts have been raised about his performance in the upcoming mega-event. That too, when Dinesh Karthik is doing so well, who can also keep the wickets.

Pant could only manage 58 runs in four innings at a strike rate of 105.45. While Karthik scored 92 runs at a brilliant strike rate of 158.62, including a match-winning knock in the fourth match in Rajkot. So it has become a talking point as to which Indian wicket-keeper will emerge as the first choice in the playing XI.

Speaking of the available options, India also has the services of KL Rahul. He can also be the wicket-keeper in the match, if India needs him. That left Pant with no choice other than to perform well with the wellow in hand. If he wants to see himself in the playing XI, he needs more consistency.

Former Indian all-rounder, Irfan Pathan, has come up with his views on the Indian team for the upcoming World Cup. In a discussion on Star Sports, he said that India should prefer to go with experienced players in Australia. Furthermore, he has excluded Shreyas Iyer and Rishabh Pant from his playing XI.

Irfan said, “In Australia, you need strong starts as the ball swings and seams. You require a player who has experience. Kohli may not have performed well so far but in Australia, he has scored a lot of runs.”

“Rishabh Pant has given me the full hand” – Bhuvneshwar Kumar after sealing the Man of the series award vs SA
Irfan Pathan picks ideal Playing XI for Team India for T20 World Cup 2022; Rishabh Pant misses out
To Top