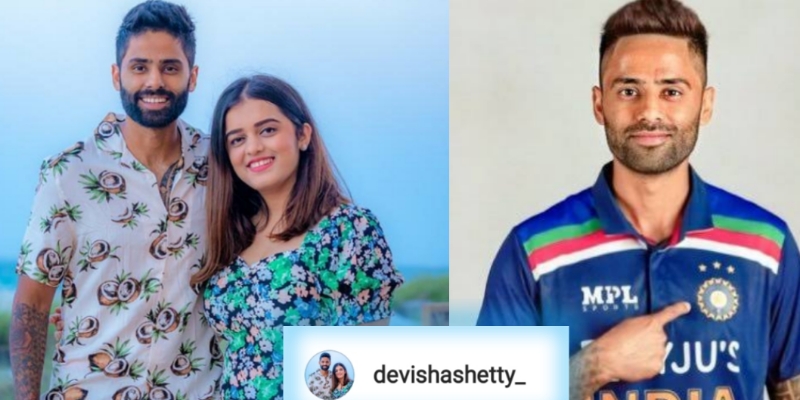 Suryakumar Yadav has been one of the most consistent performers in the Indian Premier League over the last few years. The right-handed batsman has played a pivotal role in the last two championship wins of the Mumbai Indians team. Before returning to the Mumbai Indians team, Yadav represented the the Kolkata Knight Riders in the Indian Premier League.

The Kolkata-based franchise used him as a finisher. But after returning to the Mumbai Indians team, Yadav got the opportunity to bat in the top order of the team. He has been regularly contributing a decent number of runs to the team’s total. Thanks to his fantastic performances for the Mumbai Indians, the right-handed batsman received a place in the Indian cricket team.

Suryakumar Yadav played some good knocks for the Indian cricket team in the T20I format as well, and thus, the selection committee picked him in the squad for the ICC T20 World Cup 2021. His wife Devisha Shetty has always supported him in his career, and she posted the following photo with a heart-touching caption.

“So proud of you,” Devisha Shetty captioned the photo of herself with Suryakumar Yadav at the London Eye.

Devisha Shetty and Suryakumar Yadav are in England right now

Suryakumar Yadav and his wife Devisha Shetty are in the United Kingdom right now as Yadav is part of the Indian squad for the ongoing Test series against the England cricket team.

Yadav has never played a Test match for the Indian cricket team, but there is a high chance that he makes his Test debut tomorrow because India may rest their middle-order batsman Ajinkya Rahane. It will be exciting to see how Suryakumar Yadav performs with the bat over the next few months.