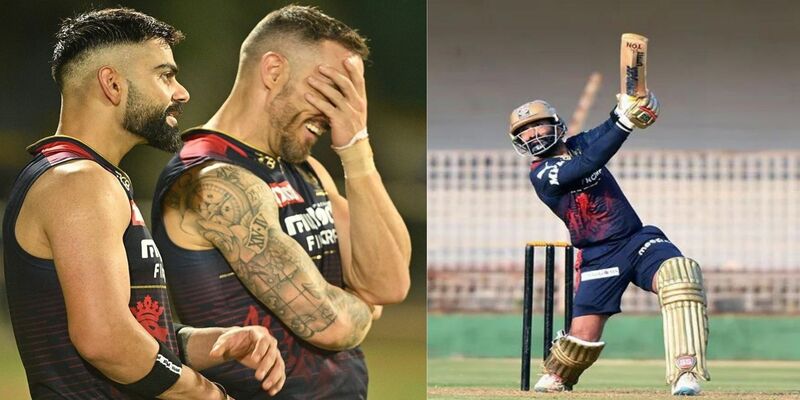 There is a double header on Saturday. Four teams will battle in two matches in a day. And the second match will be played between the two in-form teams of the TATA IPL 2022. At 7:30 PM, Royal Challengers Bangalore will take on Sunrisers Hyderabad at Brabourne Stadium in Mumbai. Both teams are sweating it out hard at the nets. For Bangalore, wicket-keeper batsman Dinesh Karthik is in prime form, along with skipper Faf du Plessis.

The franchise also shared a tweet on their official Twitter account, sharing the pictures of both batters batting at the nets. But it turned out to be a matter of hilarious Twitter conversation between the two veteran batters. The admin shared a post with a caption that read, “How to strike and pose ft.”

Dinesh Karthik, who is very active on social media, retweeted the image with a funny response. He wrote, “Faf does it better.”

However, the RCB skipper was up to it quickly. Du Plessis replied, saying that he also wished that he could hit the ball like Karthik. He retweeted, “I wish I could hit the ball as far as you bud…. one day when im big @DineshKarthik.”

Both veteran batters have contributed to their team’s success in the ongoing season of the Indian Premier League. The RCB skipper has scored 250 runs in seven matches at an average and strike rate of 35.71 and 132.27 so far. He was the reason that RCB won their last match, when he scored 96 runs against LSG and helped his team to a winning total. On the other hand, Karthik has been exceptional with his bat at the lower end of the order. He has scored runs in every match in pressure situations at a rapid pace. The wicket-keeper got out once only and scored 210 runs at an incredible average and strike rate of 210.00 and 205.88.

However, now they will face the confident SRH, who are coming off four consecutive wins. But RCB would like to win the match, get two more points, and inch closer to the playoff stage. But it will not be that easy for RCB as the Orange Army are playing some exceptional cricket and their bowling department is the best in the competition. All in all, it will be another high-voltage clash.