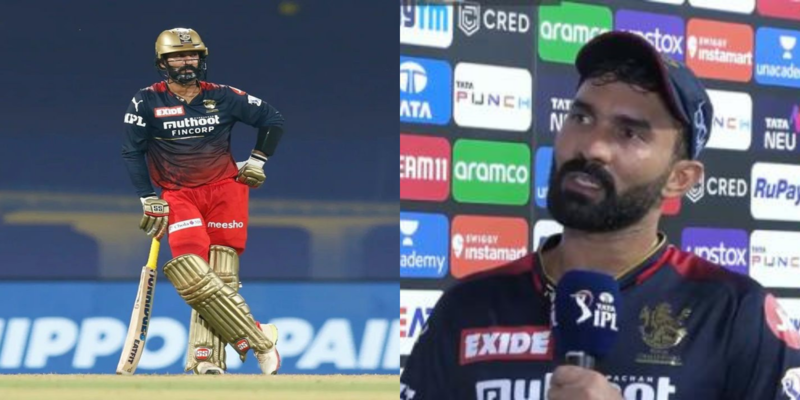 The veteran wicket-keeper batsman, Dinesh Karthik, has been in phenomenal form in the TATA IPL 2022. He has emerged as the best finisher in the tournament so far. Karthik is making sure that RCB will win all the matches and with his superhuman ability he is succeeding is doing so. However, he is not just looking to win matches for RCB. The veteran batter has revealed his desire to make a comeback for India.

Karthik is in the form of his life at 36, and is scoring at a strike rate of over 200. He has once again shown that there is a lot of cricket left in him when he played the match-winning knock against DC last night. He played a blinder of innings, 66 runs off just 34 balls, to help his team get to a competitive total. So far, he has proved to be the ideal replacement for AB de Villiers.

He has emerged as the highest run-scorer for RCB this season. Dinesh Karthik has scored a total of 197 runs in six innings at an incredible average and strike rate of 197 and 209.57, respectively. At the post-match presentation, he also revealed his plans for the future. The veteran batter said that he is working hard to achieve his bigger goal. He also said that he has been trying everything to play for the Indian team again. Karthik added, “My aim is to do something special for the country. This is part of my journey.”

He, along with young batter Shahbaz Ahmed, was involved in a crucial unbeaten partnership for the sixth wicket. Both batters added 98 runs in just 52 balls. The left-hander has also impressed everyone with his maturity at such a young age. Karthik, on the other hand, has been calm in pressure situations to target the bowler in the death overs.

Speaking further, the veteran batter said that he likes it when people associate calmness with him. But all of these things come from the right preparations. Karthik also praised Shahbaz, saying that he is a special player and will achieve special things as a player. He also pointed out that the left-hander is also up for a challenge and can hit the ball a very long way.