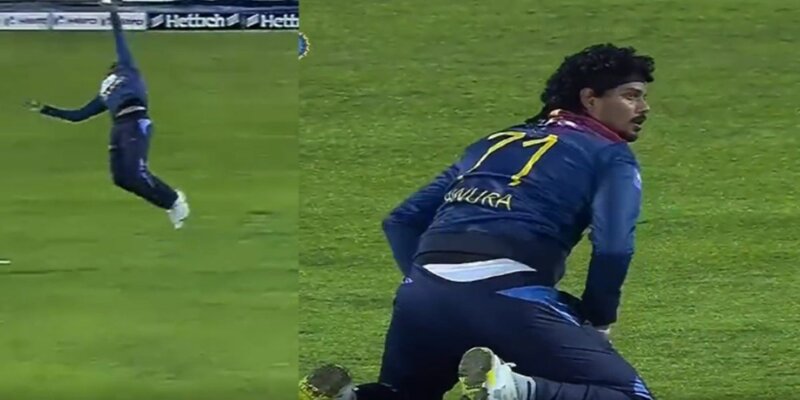 The second T20I match between India and Sri Lanka was full of action. It was a high-scoring encounter. A total of 369 runs were scored in just 37.1 overs in the match. And in the end, it was India who won it comprehensively by 7 wickets with 17 balls to spare. Sri Lankan bowling started pretty well at the start and got both openers out in the powerplay. But then came Sanju Samson, who took a few balls to settle down

And then Sanju, along with Shreyas, started playing their shots, and it was pure power-hitting from these two Indian batters.

Sri Lanka skipper Shanaka brought his ace pacer Lahiru Kumara to break the partnership in the 13th over. But Sanju smashed him all over the ground. He hit him for three sixes and one boundary in the first five balls. And even tried to smash the last ball for another boundary, but got an outside edge and it flew to the third slip.

Binura Fernando, who was fielding at that point, jumped in the air and took a blinder of a catch. And the reply showed that the 6’6″ player jumped a long way up to grab the catch one-handed.

Binura Frenando What a catch ! pic.twitter.com/LGNGPkBAb5

The Men in Blue have already won the series now, with one match left to play. And with this win, skipper Rohit Sharma became the most successful T20I captain with the most wins (15) at home. He has also completed 50 T20I catches. The Indian team chased the big target easily. Shreyas Iyer was adjudged “Man of the Match” for his knock of 74* off 44 balls. And the decision of sending all-rounder Ravindra Jadeja up the order worked for India as he made a mockery of the Sri Lanka bowlers. The all-rounder scored 45* runs in just 18 balls with a strike rate of 250.